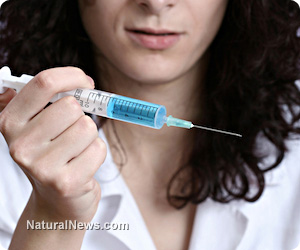 Controversy has erupted in western Canada after public school nurses reportedly vaccinated a 14-year-old student without her parents’ consent. CBC.ca reports that the Bootsma family of British Columbia is furious and demanding answers after their ninth-grader was pulled out of class one day and coerced into getting the combination DTaP (diphtheria, tetanus and pertussis) vaccine without a parental consent form or even parental notification.

Dean Bootsma says his daughter became a target of the state after school officials learned that she had not been jabbed like most of the other children in her class, a conscious and deliberate decision that he and his wife made after their other daughter died following routine vaccinations. Believing that their now-14-year-old daughter, who has chosen to remain anonymous, may also have a predisposition to vaccine adverse events, the Bootsmas hoped to take the precautionary route by avoiding vaccines altogether.

But these hopes were dashed when faculty at the local public school preyed on the young girl, essentially intimidating her into getting the shot against her will. Speaking to reporters, the girl explained that she was never really given the option to decline the vaccine, even though she was fully aware at the time that her parents did not want her to get vaccinated, of course for her own protection.

“My sister in the past had an allergic reaction to it,” stated the 14-year-old about her sister who reportedly died 10 years ago after suffering from a brain malformation known as cerebral dysgenesis. The Bootsmas say the child was a perfectly healthy baby until she got her shots, after which her health quickly declined. “I didn’t really know what to do,” she added, “and [the nurse] didn’t really give me an option to not get a vaccine.”

BC laws allow ‘mature’ minors to make their own vaccine decisions

In defense of the school’s decision, the Fraser Health Authority, which governs the health services provided to the public where the Bootsmas live, cited the so-called B.C. Infants Act, which apparently allows children 14 years of age or older who are deemed to be “mature” to decide on their own whether or not to get vaccinated.

According to CBC.ca, as long as a doctor or nurse believes a child to be mature enough to fully understand the risks and benefits associated with a particular vaccine, that child can decide to accept it without first consulting with the mother or father, an outrageous provision that allows the state to essentially override parental authority in matters of medical treatment for minors.

“The fact that they did this without our knowledge or consent sickens me,” stated Dean Bootsma to reporters. “I’ve never felt so violated.”

Obviously unashamed of their horrendous and predatory behavior in the matter, both the state and the school admitted that, when vaccination compliance rates get “too low,” public health nurses specifically target unvaccinated children using the B.C. Infants Act as legal cover. And in many cases, they are successful in convincing these impressionable young minds to follow the state’s lead rather than first consult their parents.

“Nurses will, in fact, go and look for the unvaccinated kids to see if they can get them vaccinated,” stated Provincial Health Officer Perry Kendall to CBC.ca, adding that, once a child is convinced to sign a mature minor consent form by school officials, that same child is released from the protection of his or her parents and treated as open game for the compliance pursuits of the vaccine industry.