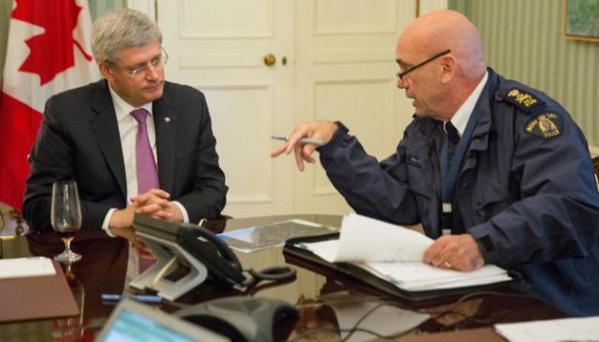 Canadian Prime Minister Stephen Harper is taking heat for reportedly drinking on the job during a briefing on the Ottawa shooting, which is obviously not the behavior you’d expect from the head of state during a major crisis.

Uh, maybe our PM can wait until order is restored before pouring himself a glass of wine? #OttawaShooting pic.twitter.com/bv3u4tI63C

The photo shows Harper with a wine glass of what appears to be red wine as he’s briefed by Royal Canadian Mounted Police Commissioner Bob Paulson.

@WilliamsJon @pmharper So what kind of wine does Mr. Harper drink when his country is being attacked?? #cdnpoli #OttawaShooting

Time of crisis in Canada and what pic they show of our our Leader Harper….A Wine glass lol….Nice…@cnnbrk @nsgov @CTVAtlantic

While others may suggest it’s not a big deal, drinking on the job is definitely not the behavior you’d expect from the leader of a country who’s dealing with a mass shooting in his nation’s capital.

The photo adds further scrutiny to the Canadian government’s response to the shooting near the Parliament of Canada, which claimed the life of one Canadian soldier.

Just minutes after the shooting, for example, the RCMP asked the public not to post videos or photos relating to the shooting as it was occurring, raising concerns that officials were trying to clamp down on the details of the shooting available to the press.

“Members of the public are asked not to post videos or photos of the on-going incident to ensure safety of first responders and the public,” the RCMP announced via Twitter.

But considering that videos and photos shot by the public during the Ferguson, Mo., protests exposed government wrongdoing, and the fact that the press routinely uses social media as a source of news, it’s not a stretch to suggest the RCMP was attempting a media blackout.

Correspondingly, Canadian police pointed their guns at journalists not long after the shooting.

“Police have locked down Parliament and Ottawa Police tactical officers have arrived, pointing guns at journalists and ordering them to the ground,” Globe and Mail’s Josh Wingrove reported. “Journalists were put into lockdown at the foyer in front of the House of Commons.”