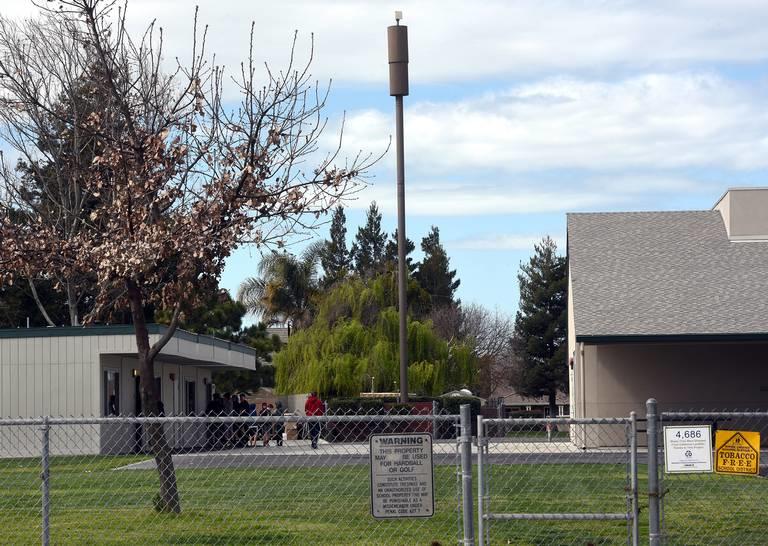 A Sprint cell phone tower will be removed from a California elementary school after four students and three teachers were diagnosed with cancer.

Weston Elementary School in Ripon, CA went on high alert after the controversy erupted two years ago – with some parents even pulling their children from school over the tower which Sprint has been paying the school $2,000 per month to place on its property.

The Ripon Unified School District initially defended the cell phone tower earlier this month, with board president Kit Oase saying tests done on the tower had found it was operating within safety standards.

Monica Ferrulli, whose son was treated for brain cancer in 2017, said RUSD has cited an obsolete American Cancer Society study in keeping the tower in place since the controversy erupted two years ago. “It is just denial,” Ferrulli told the board. She vowed that parents will continue to fight and keep their children out of the school. –Modesto Bee

Around 200 parents attended a meeting after a fourth student was diagnosed with cancer on March 8.

Richard Rex, whose family lives across the street from Weston School, said a bump appeared on his 11-year-old son’s abdomen a month ago. He said his son’s classroom is near the tower.

The volume of censorship now taking place in America is unprecedented as well as ominous. Alex explains that now is the time for patriots to stand up before Big Tech fully turns America into China.

The parents first thought it was a skating injury. Instead of going to science camp, 11-year-old Brad was taken to doctors for examinations and tests that found a tumor wrapped around his liver. The boy now has a portal for starting cancer treatment, the parents said.

Richard Rex said he’s hearing different options for treating the cancer. “They said they can shrink it and cut it out. They’re also talking liver transplant. It is very scary,” Rex said. –Modesto Bee

Sprint representative Adrienne Norton said that the company has been “working with the community in Ripon to address their concerns.”

The potential negative health effects from electromagnetic fields (EMFs) emitted by cell towers or transmission lines have been long debated. While the National Cancer Institute cites studies which conclude that EMFs are a possible human carcinogen based on research which focused on childhood leukemia. The institute’s website says there are no increased risks from brain tumors or other cancers based on European epidemiological studies.

According to notices posted by RUSD, the school district hired engineers for an evaluation in 2018 on the cell tower’s compliance with guidelines for limiting human exposure to electromagnetic radiation. The testing found exposure levels for people nearby were below the federal standard, the notices says.  –Modesto Bee

So while parents are blaming the Sprint cell phone tower is responsible for the cancer cluster at Weston Elementary School – it’s entirely possible that other environmental factors are at play.