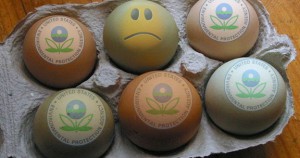 Dioxin is the most toxic man-made chemical known regarding damage to health and the environment.  The EPA has withheld a study about dioxin for decades in order to protect large industries that produce dioxin while manufacturing herbicides and pesticides, plastics, chlorine, bleach, and other chemicals.  In addition, industrialized agriculture (Big Ag) has pressured the EPA to withhold the report because dioxin becomes concentrated in animal products like meat, eggs and dairy.

The non-cancer portion of the EPA report is due out by the end of January 2012, with the cancer portion to follow at some unspecified date.

Dioxin is an umbrella term for a class of super toxic chemicals that cause cancer, birth defects, liver disease, immune system damage and many other health problems.  There is no safe ‘threshold’ dose as our bodies have zero defense against dioxin, according to health consultant Jonathan Campbell.

Dioxin has a half life of over 100 years in the environment when it is below the surface or dumped in waterways.

Monsanto and Dow Chemical were the largest producers of 2,4,5-T herbicide that created dioxin as a byproduct and was used as an agricultural herbicide before the 1950′s.  Monsanto, Dow Chemical and other makers of dioxin-contaminated herbicide 2,4,5-T produced 50 MILLION pounds of these chemicals per year for agricultural uses in the US!  Since 1947, more than 300 million pounds of dioxin laden 2,4,5-T was sprayed on more than 400 MILLION acres of US land, mostly on farms and agricultural property.

The 2,4,5-T dioxin-containing herbicide was later combined with 2,4-D to create Agent Orange for chemical warfare against Viet Nam.

Both Monsanto and Dow Chemical were aware, since the 1950′s, that German company Boeringer was able to produce herbicide 2,4,5-T without any detectable dioxin by slow cooking the chemical for about 12 hours.  But Monsanto and Dow ignored this information and cooked their 2,4,5-T batches in 45 minutes or less, thus contaminating the product with dioxin — presumably for higher profits.

While dioxin may be produced naturally by forest fires and volcanoes, man-made dioxin emissions are the primary source of contamination.  Dioxin has risen dramatically due to an increase in manufacturing of chlorinated organic chemicals (weed killers) and plastics.  Here is a list of some of the top sources of dioxin emissions:

After reading this list, it becomes apparent that many industries, especially chlorine manufacturers, herbicide makers, plastic producers and paper mills would be severely affected if dioxin were properly regulated or eliminated.  Industrialized farming (Big Ag) also has a big stake in the EPA’s upcoming report because the largest source of human absorption of dioxin is through consuming animal products like meat, dairy and eggs.

View a chart of the top 30 dioxin polluters in the US.

EPA Drags Its Feet in Reporting on Dioxin Hazards

The EPA has delayed its Exposure and Human Health Reassessment of TCDD (dioxin) report for decades due to pressure from Big Industry.  For example, President Bush delayed the report in a “last-minute gift” to the chemical industry just before leaving office.  Another example is when the EPA and the Chlorine Institute (later the Chlorine Chemistry Council of the American Chemistry Council) were chummy co-sponsors of a conference on dioxin in 1990, indicating that the industry may have undue influence over the EPA.

The EPA has a history of shielding Monsanto from accountability.  In the town of Nitro, West Virginia, the Big Monsanto plant produced dioxin-contaminated 2,4,5-T herbicide from 1948 to 1969 and they burned the waste in open pit fires. The EPA has conducted study after study but has failed to force remediation that could cost Monsanto as much as $4 billion.

How To Avoid Dioxin

•  A vegan diet is recommended, especially for nursing mothers.  Beef and pork contain the highest concentrations of dioxin.  Freshwater fish is unsafe.

•  Use only oxygen bleach products instead of chlorine bleach

It is obvious that collusion between our taxpayer-funded government and Big Industry has resulted in the death and disease of untold numbers of Americans.  The criminals of Big Industry will not stop producing dioxin-laced products until they are held accountable.

Hemp can replace many plastics: it is natural, biodegradable, uses little water and no herbicides or pesticides are necessary.  Ron Paul is an outspoken critic of the failed war on drugs that prevents the use of industrial hemp.  Industrial hemp should not be classified as a drug.