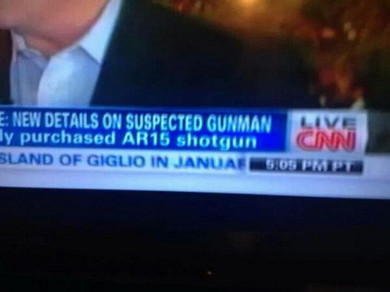 After initial reports about an AR-15 rifle being used in the Navy Yard shooting were retracted Monday, CNN went on to continuously claim that the shooter’s shotgun was actually an “AR-15 shotgun.”

While the facts of Monday’s horrific shooting were still coming in, political pundits wasted no time in exploiting the tragedy by immediately claiming an AR-15 rifle was responsible. Several media figures including CNN’s Piers Morgan began their usual calls for a ban on the rifle despite the fact that it is involved in less than 2.5% of murders and used responsibly by millions of Americans. After reports revealed that a shotgun was the primary weapon, CNN continued its demonization campaign by deceitfully labeling the shotgun as an “AR-15 shotgun.”

The caption not only presents a mythical weapon, but also claims this weapon was legally purchased by Alexis. In fact, it was the shotgun that was legally purchased and an AR15 is thought to have been rented and returned prior to the incident, details that seem unimportant to CNN’s producers. Other inaccuracies regarding the incident including the capability of the non-existent AR15 continue to be pushed by the media as well.

Throughout the incident gun control advocates have continued to make bizarre claims in order to justify continued tragedies in disarmament zones. Monday evening, Democratic Congresswoman Eleanor Holmes Norton went on to claim that Washington D.C. is the “safest city in the United States” despite the staunch reality that it is actually one of the most dangerous big cities in the country.

CNN and other media outlet’s attempts to push gun control based on emotion, not fact, has only increased the public’s disillusionment with the corporate media. Information such as the establishment’s admission of a 49 percent drop in gun homicide since 1993 is seemingly irrelevant to the gun debate according to CNN and others. Other pertinent information such as the 1993 law passed by former President Clinton that forbids military personnel from being armed on military bases has also been swept under the rug.