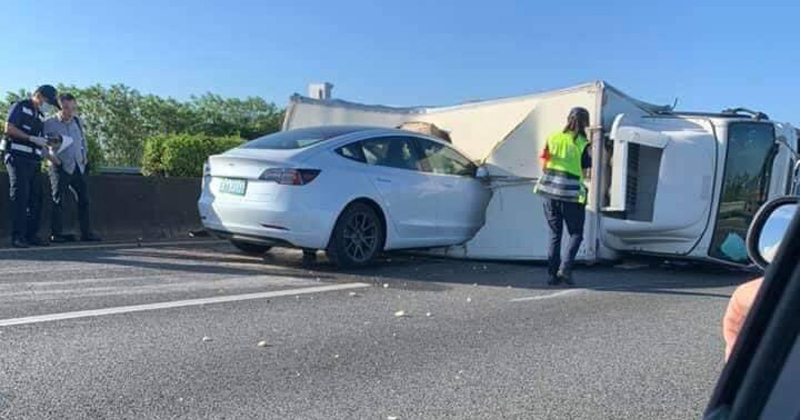 A dramatic video emerged over the weekend of a Tesla traveling on a highway in Taiwan, at what appears to be full speed, before slamming directly into an overturned truck that was laying across the highway.

The Tesla appears to make little or no change in direction before hitting the truck. At one point, smoke can be seen coming out of the back tires of the vehicle, indicating that the Tesla may have tried to brake – but to no avail.

The Tesla was “presumably on Autopilot,” Inside EVs said. “Clearly, the car should’ve stopped itself here and you’d think this scenario would be among the easiest for a system such as Autopilot to detect and respond to, but that’s definitely not the case.”

The video of the incident was taken by surveillance cameras on the morning of June 1, 2020, local time.

On Reddit, one poster postulated that the incident may have happened due to the vehicle’s lack of LIDAR, which Elon Musk has publicly ridiculed and has said is unnecessary:

Radar cannot generally perceive stationary obstacles. Teslas have no lidar. The flaw with stereo vision is that the primary algorithm is looking for pixel shifts across epipolar lines between the two cameras. A solid color object has no perceivable pixel offset.

Tesla is also using neural networks, where the computer is able to estimate distance by assuming an object of a particular class is similar in size as other objects of that class. (so, for example, a 1/4 scale fire truck parked in the travel lane might fool it).

There are other things humans do vision wise that Tesla can try, however, the best fix is to just add lidar. Lidar can see nearly all cases of solid collidable object.

You can see the video here:

Here are two other videos, including one from the opposite angle.


Inside EVs noted that “it doesn’t appear as though any of the Tesla’s airbags deployed in the incident.”

All that and not a single airbag in the car appears to have gone off. That should be the bigger story here pic.twitter.com/ssi9339vOO


Recall, just a day ago, we reported on a Tesla that was found to have drive off a cliff under “mysterious” circumstances in Santa Clara County, California.

According to the California Highway Patrol, the Tesla “went over” the cliff, and the driver, 60-year-old Pleasanton resident James Yacorzynski, was found dead at the scene.

California Highway Patrol officer Ross Lee commented that authorities were unsure how long the Tesla had been sitting at the bottom of the cliff.

Recall, earlier this year the NTSB revealed that Autopilot had played a role in a fatal 2019 Model 3 accident in Delray Beach, Florida.

The NTSB had also arrived at similar findings regarding a 2016 Florida crash where another Tesla driver didn’t react to a truck in the roadway. In that instance, the NTSB found that Tesla’s Autopilot design contributed to the cause of the accident.

The driver was decapitated.