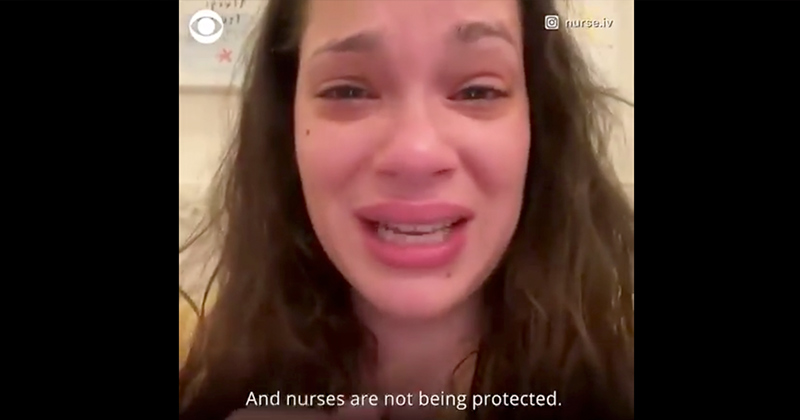 CBS apparently refuses to properly vet information before disseminating it to millions of people in an attempt to make Donald Trump look bad.

Last week, the outlet used footage of the “worst-hit” hospital in Italy and claimed it was video from a New York hospital.

Now, CBS is promoting a video of a crying ICU nurse claiming her hospital is experiencing a mask shortage and that nurses are forced to work in poor conditions.

However, within 24-hours of CBS sharing the footage, the nurse’s story has totally fallen apart.

“America is not prepared, and nurses are not being protected,” she says in the video, which has been viewed over six million times. “I quit my job today. I went into work and I was assigned to a COVID patient on an ICU unit that has been converted to a designated COVID unit. None of the nurses are wearing masks.”

In tears, a nurse says she quit her job after she was asked to work in a coronavirus ICU without a face mask: “America is not prepared, and nurses are not being protected” https://t.co/ywoSuLOPYP pic.twitter.com/S5BsnlO5nt

So, without vetting the woman’s story, CBS edited and released the video.

Yet CBS had a producer add music, captions, etc to it without even vetting this fraud. Good job guys.

With the help of “internet sleuths,” National Security expert Jordan Schachtel dissected the story on Twitter by showing the nurse hadn’t worked in a hospital for a year and that her account took place on her first day back at work.

It originally appeared she worked for four days, but a March 26 post by the nurse reveals she returned to work on March 30, the same day she quit.

Ok turns out I was too friendly about the timeline. The lady quit on her first day back on the job. https://t.co/gkNjOYXLTm

After the footage went viral, the nurse began backtracking on some of the key accusations she made.

Responding to Sen. Bernie Sanders on Twitter Sunday, the nurse wrote, “We were each assigned 1 N95 per 1 covid patient’s room but was not allowed to wear it outside of the room, wear our own N95 mask around the Nurses station or Halls, which I came prepared with.”

Schachtel noted the nurse switched from claiming “nurses are not being protected,” to admitting they did have masks and were required to wear them when treating COVID cases.

Initial story:
1) Mask supply empty
2) Not allowed to wear masks around any1 even COVID patient.

New story:
1) Actually, we did have masks and they were provided & required when treating COVID cases.

A bit of a key difference, no?https://t.co/bkS8OinwGJ

Summarizing, Schachtel explained, “[The] Hospital did have adequate supply of PPE & masks & was taking proper precautions, while making prudent decision not to blow through supplies. She shows up, 1st day on job, wants to break protocol & do her own thing. They say no. She quits & goes full crisis actor.”

Bottom line: Hospital did have adequate supply of PPE & masks & was taking proper precautions, while making prudent decision not to blow through supplies. She shows up, 1st day on job, wants to break protocol & do her own thing. They say no. She quits & goes full crisis actor.

Basically, without properly vetting her, CBS aired footage of a nurse who only dealt with COVID-19 for one workday and lied about the hospital’s preparedness.

Update: Another video of the nurse has surfaced in which she appears to be downplaying coronavirus or possibly mocking those who downplayed it in the beginning.