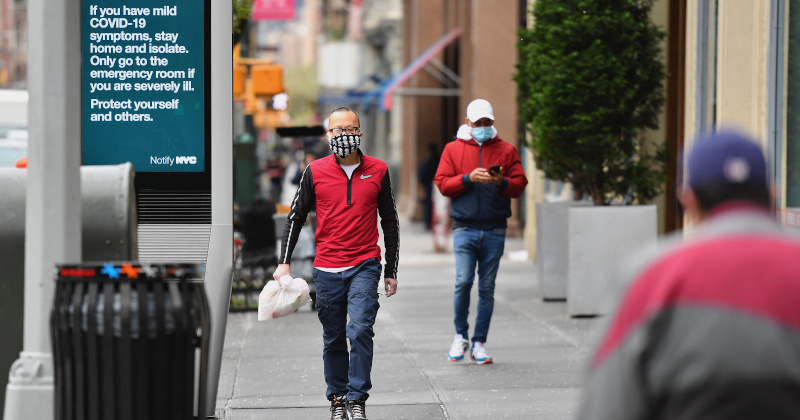 Guidance to Americans from the Centers for Disease Control and Prevention on face coverings and masks will be released “in the next several days,” Vice President Mike Pence said Thursday.

Trump suggested people might want to put scarves over their faces for protection instead of the N95 respirators that are critically needed by those on the front lines responding to the COVID-19 pandemic.

“If people want to wear them, they can,” Trump said of masks that could play a role in preventing a wider spread of the novel coronavirus.

The response coordinator of the White House coronavirus task force, Dr. Deborah Birx, cautioned that people should not “get a false sense of security” that they are protected from the virus by wearing a mask. It is more critical, she said, for people to keep their distance from each other in public and to frequently wash their hands.

White House senior adviser Jared Kushner said the federal government would send to the New York public hospital system a supply of 200,000 N95 protective masks for medical workers to use through the next month.

During Thursday’s media briefing by the White House coronavirus task force, Trump announced he had taken a second test for COVID-19, this one a rapid “point-of-care” test.

“I think I took it really out of curiosity to see how quickly it worked,” Trump said.

The test was done in one minute, and results came back Thursday morning within 15 minutes, according to a letter released by the White House physician, Dr. Sean Conley, who said the results were negative and the president “is healthy and without symptoms.”

The leader of the Democrats in the Senate, Chuck Schumer, is calling on the Trump administration to appoint a military official as a czar for production and distribution of desperately needed medical equipment.

“America cannot rely on a patchwork of uncoordinated voluntary efforts to combat the awful magnitude of this pandemic,” said the Senate minority leader in a message to the president. “It is long past the time for your administration to designate a senior military officer to fix this urgent problem.”

“Somebody please explain to Cryin’ Chuck Schumer that we do have a military man in charge of distributing goods, a very talented Admiral, in fact,” tweeted Trump, referencing Rear Admiral John Polowczyk, who is leading the supply chain task force of the Federal Emergency Management Agency.

Somebody please explain to Cryin’ Chuck Schumer that we do have a military man in charge of distributing goods, a very talented Admiral, in fact. New York has gotten far more than any other State, including hospitals & a hospital ship, but no matter what, always complaining…..

The president also suggested Schumer “should have pushed harder” to ensure the senator’s home state of New York, the epicenter of the pandemic in the United States, had adequate supplies to deal with the deluge of coronavirus patients.

Later in the day, the White House released a letter the president sent to Schumer. In addition to making those points, it also said that if the lawmaker had spent less time focusing on impeaching Trump and more time helping the people of his state, “then New York would not have been so completely unprepared for the ‘invisible enemy.’ ”

New York is the hardest hit by the disease among the 50 U.S. states. There have been about 1,400 deaths from the virus just in the city of New York.

The United States has more confirmed COVID-19 infections than any other country. The total Thursday surpassed 243,000 with more than 5,700 reported deaths, according to a running count kept by Johns Hopkins University.

Globally, the total number of cases has exceeded 1 million, with more than 52,000 confirmed fatalities.