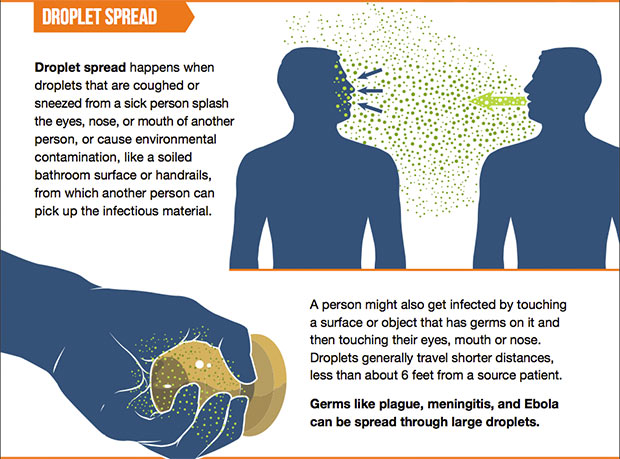 The Centers for Disease Control and Prevention has released a new document that doubles the previous length in which Ebola droplets can spread through sneezing and coughing.

Posted to the Ebola information section of the CDC’s website, the new document states that a person within 6 feet of an Ebola victim may potentially become infected.

“A person might also get infected by touching a surface or object that has germs on it and then touching their eyes, mouth or nose,” the document states. “Droplets generally travel shorter distances, less than about 6 feet from a source patient.”

A previous document, which was pulled down from the CDC website without explanation, argued that droplets could only spread 3 feet, a claim the CDC originally worked to deny altogether.

“Droplets travel short distances, less than 3 feet (1 meter) from one person to another,” the document claimed.

Despite spending the last several months working to convince the public that such transfers were impossible, A CDC advisory from early last August entitled Interim Guidance about Ebola Virus Infection for Airline Flight Crews, Cleaning Personnel, and Cargo Personnel clearly showed that the agency was in fact aware of the potential danger posed by airborne droplets.

Airline workers were asked to not only wear surgical masks in order “to reduce the number of droplets expelled into the air by talking, sneezing, or coughing,” but also told to “not use compressed air, which might spread infectious material through the air” when cleaning an airplane.

Even with documentation pointing out the danger, the CDC continued to deny the possibility of the spread of Ebola through droplets at an October 7 press conference.

In reality, as noted by Washington’s Blog, engineers at MIT have shown that sneezes can travel up to 20 feet, more than 200 times farther than previously believed.

The CDC’s constant flip-flopping on important facts and refusal to implement proper protocols has caused a massive backlash among the American public, with only 37 percent believing the agency has done an “excellent or good job” in major polls.