Adult smokers in the U.S. are kicking the habit at a rate that researchers haven’t seen in 20 years.The rate of smoking fell to 15% in 2015 due to the biggest 1-year decline in 2 decades.

The rate fell 2 percentage points from 2014, when approximately 17% of adults in a large national survey said they had recently lit up. The last time Americans kicked the habit at that pace was from 1992 to 1993, when the smoking rate dropped 1.5 percentage points, said Brian King of the CDC.

People have been tossing their packs of smokes in the trash for decades, but the smoking rate typically drops only 1 point or less than a year.

The statistic – which has experts a bit baffled – was announced by the CDC on May 24. The number is based on a large national survey which the government uses to measure many health-related trends. The agency can’t specify why the smoking rate dropped so dramatically in 2015, or if it will drop that way again.

Many of us have heard tales of how “everybody” used to smoke. There was a time when you could smoke on airplanes (not all that long ago, actually), you could smoke at work, heck, TV reporters could even smoke on the air. Fifty years ago, 42% of the population sucked on cigarettes and thought nothing of it, including pregnant women. Anti-smoking ad campaigns, cigarette taxes, and smoking bans made many people kick the habit.

E-cigarettes, which heat liquid nicotine to vapor without releasing the dangerous byproducts created by burning tobacco, have helped smokers both continue to get their nicotine fix more safely, or use the devices to quit entirely. However, the jury is out on just how safe e-cigarettes truly are, and studies show the devices may be getting kids who never smoked before addicted to nicotine. [1]

Read: 3 Cigarette/Tobacco Facts You May Not Know About 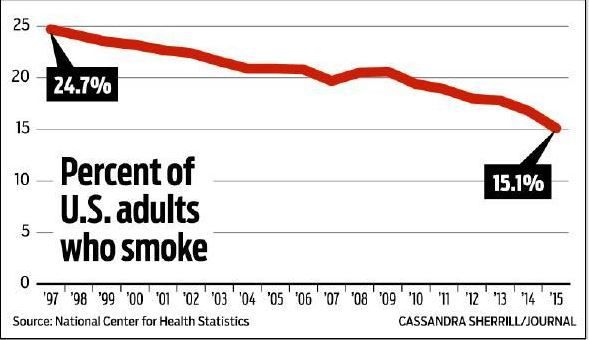 Smoking is the leading cause of preventable disease and death in the U.S., resulting in 480,000 premature deaths every year, and more than $300 billion in direct health care expenditures and productivity losses.

Though the smoking rate may be dropping Big Tobacco continues to show quarterly and annual revenue gains. This is partly due to per-pack list price increases to distributors that are passed on to consumers.

Some smokeless tobacco advocates had predicted that e-cigarettes, vaporizers, and hookahs would outsell traditional cigarettes within 5 to 10 years, but that might not be a possibility, now that the FDA announced it will regulate e-cigarettes the way it regulates other smokeless tobacco products. The regulations could destroy thousands of small vape businesses, and perhaps make vaping a thing of the past.