Although it may seem unbelievable, this is not a satire piece or a joke. The U.S. Centers for Disease Control, which has been deeply engaged in the fictions of Swine Flu and other so-called “pandemics,” is now publicly warning Americans to prepare for a zombie apocalypse. 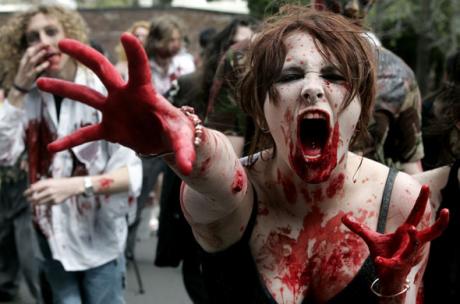 In a May 16th blog entry on the CDC.gov website (http://blogs.cdc.gov/publichealthma…), author Ali S. Khan asks the question, “Where do zombies come from and why do they love eating brains so much?” The article then goes on to suppose that “zombies would take over entire countries, roaming city streets eating anything living that got in their way. The proliferation of this idea has led many people to wonder – How do I prepare for a zombie apocalypse?”

The CDC has apparently been listening to my hip-hop song Vaccine Zombie (http://www.naturalnews.com/vaccine_…) and decided to run with the concept. Vaccines, of course, are the real source of zombies because they eat your brain (and cause autism, too). For some reason, the CDC didn’t mention that…

The CDC’s zombie apocalypse article is, of course, an effort to reach a younger crowd by appealing to mainstream youth interests which now include anything having to do with vampires and zombies. The article actually offers a useful but rudimentary set of preparedness tips that include gathering up emergency medicine supplies, food, water and tools.

Some of the strategies include preparing all your “important documents” such as your passport and birth certificate. This is obviously based on the idea that you are going to be relocated and will probably end up as a refugee of some sort (in a FEMA camp, no doubt). So remember to bring your birth certificate. Of course, if you don’t actually have a birth certificate, you can always use Photoshop to create one from a collage of random scanned documents and no one will notice the difference these days. Not even the mainstream media.

Not surprisingly, the CDC also strongly suggests that you should bring your medications with you, because of course the entire U.S. public has already been infected with a zombie-like medical mythology that causes them to believe the human body is somehow deficient in prescription drugs. Without their meds, people think they might die! Although there are a few cases where this is true, by and large medications harm far more people than they help. But that’s another story…

CDC: Do not defend yourself against the attacking zombies

One thing the CDC has utterly left out of its preparedness list, not surprisingly, is any kind of self defense weapon. Zombie lore is rife with all kinds of weapons: shotguns, chain saws, flamethrowers, swords and knives. Hand grenades, explosives and rockets are also prominently featured in zombie flicks. These weapons are usually what save the movie characters from being overrun by marauding zombies.

But the CDC says nothing about weapons. Not even a basic combat knife or a 22 pistol to keep handy. I guess the idea of people preparing for emergencies with some citizen weaponry isn’t something the government wants to encourage, huh? Just be sure to have your papers in order but not your personal safety.

Instead, the CDC says it will save you. “Never Fear – CDC is Ready!” it says. It goes on to explain:

CDC would provide technical assistance to cities, states, or international partners dealing with a zombie infestation. This assistance might include consultation, lab testing and analysis, patient management and care, tracking of contacts, and infection control (including isolation and quarantine).

“Infection control” means arrested infected people at gunpoint and moving them into “infection zones” where everybody is infected and anyone who tries to flee is shot. That’s how a quarantine actually works, in case you didn’t know. Ask the CDC yourself if you don’t believe me.

So here’s the CDC’s advice so far. If there’s a zombie apocalypse, then according to the CDC you’re supposed to evacuate with your prescription medications and your birth certificate, then head out into the zombie-infested world without a weapon? And then somehow you’re supposed to magically survive a zombie assault long enough for the CDC to come quarantine you and your neighbors because you’ve probably already been exposed since you were totally defenseless.

Gee, is there any doubt this is a government plan? Don’t protect yourself, folks, the government will save you! Grab your passport (they’ll be checking your papers at police checkpoints) and remember your meds (because that will keep you docile and suggestible), but don’t bring anything like a 45-caliber Glock pistol that might actually help you fend off the zombies. Or a pump action Remington 12 gauge with a couple hundred extra rounds of home defense shells. Seriously, you can’t have a zombie invasion without a 12 gauge shotgun being involved, can ya? Or some 40mm grenade launchers. That’s how you really take out a bunch of zombies. At least that’s how it works in Hollywood.

If you’re in a city where you’re not allowed to own firearms, you can always try to fight off the zombies with golf clubs. That never works out very well in the zombie movies, however. Just so you know.

One enterprising inventor has strapped a chainsaw to the underside of an AR-15 and developed the ultimate zombie-killing weapon: The AR-15AZ (Anti-Zombie) device, which he demonstrates on a collection of pumpkins in a video you’ll find on this page: http://mazurland.typepad.com/mywebl…

All he needs now is to add a flamethrower, and he’s all set.

The sad part in all this is that thanks to the swine flu fiasco which was an obvious fabrication of a pandemic in order to sell useless vaccines to people, the CDC has lost a lot of its credibility. Hey, even I used to respect the CDC as a serious agency that was dedicated to trying to stop infectious disease, but after the swine flu situation, it became completely obvious that the CDC is now just Big Pharma’s vaccine pimp squad. It is so steeped in corruption that even one of its own former scientists has now been indicted by a federal jury on charges of money laundering and fraud (http://www.naturalnews.com/032216_T…).

On top of that, the former head of the CDC, Julie Gerberding — who was also one of the top disease mongers pushing vaccines over the last few years — now runs the global vaccine division for Merck. How’s that for a revolving door between the CDC and the vaccine makers? (http://www.naturalnews.com/027789_D…)

So now the CDC is basically a joke to anyone really paying attention to health and infectious disease. We now know that almost everything coming out of the CDC’s press office is a politically motivated, profit-driven fabrication designed to push useless vaccines or scare people into thinking they’re about to be killed by some other mutating flu virus. That’s why it’s no surprise to see the CDC using the zombie apocalypse fiction as a propaganda catapult. And hey, why not? The CDC is already steeped in complete fictions and B-movie fabrications. They might as well just start interviewing fairies, leprechauns and garden gnomes, too. They’re about as credible as CDC scientists these days.

But at least the CDC’s preparedness advice offers tidbits of real value: Have an emergency kit with food, water, tools and first aid. That’s more than what President Obama says. In response to the Fukushima meltdown — which has now been confirmed to be a far worse disaster than Chernobyl, with multiple core meltdowns — Obama told Americans to not prepare at all! (http://www.naturalnews.com/031735_O…)

Just listen to the government and await instructions, he said. That’s the official White House preparedness plan. If you can even call it a plan.

The NaturalNews preparedness plan is a far better choice if you want to survive what’s coming. Because, as you’ll see below, a zombie apocalypse actually isn’t as far-fetched as it sounds.

Why a zombie apocalypse may be more real than you think

The average American consumer is already a half-zombie right now. They eat prion-infected meat; they drink fluoride in the water; they get vaccinated every year with neurological irritants (adjuvants); they watch network television news for “programming” and they take psychiatric medications that alter their brain chemistry. That pushes quite a large number of them into the “functioning zombie” realm of cognitive dysfunction.

In other words, they still manage to dress themselves, eat some food, use the toilet and punch a time card working some government job, but behind the apparent human face, they are already 50% zombie.

It won’t take much to push these near-zombies over the edge into total zombiehood. A bit of radiation, a couple more winter flu shots, or even a series of neurologically-engineered red flashes broadcast on the evening news could activate the zombie brains of the American masses, causing them to spill out into the streets in their underwear, with Doritos crumbling down the front of their wife beater T-shirts, mouths gaping wide open as they stumble down the sidewalks of America’s suburbs looking for fresh flesh to feed upon.

This part is not fiction, by the way. I’m serious about this. The zombie mind of the masses has already been prepped by mercury poisoning, pesticides, fluoride, aspartame and other chemical exposures. It will only take the right trigger to unleash the zombie masses, at which point you will definitely wish you went beyond the CDC’s silly advice and got yourself a 12 gauge (or a really good pair of sneakers with which to flee).

The real question is: Do you have enough zombie ammo? And how fast can you reload? Sadly, the CDC did not address these questions. The truth is that most people do not have much zombie ammo at all, so after a few rounds, it’s going to be like click… pause… gobble, gobble, slurp. And then suddenly you’re a zombie and you’ll be roaming the streets of a large American city looking for fresh flesh, much like a Congressman or the head of the IMF.

In a way, I actually kind of admire this fictional approach by the CDC. I wish more government agencies would just admit they’re writing fictions from the get go. Wouldn’t it be more useful for us all if the DEA, for example, just admitted its entire War On Drugs was one great big fiction? Wouldn’t it save us all a few trillion dollars if the Department of War (oops, I mean, the Department of Defense) openly admitted that its multiple imperialist wars were all based on fictional justifications?

I think other U.S. departments should take a cue from the CDC and start writing fictions to explain all their actions. It would be a lot more entertaining and, in a strange way, actually more honest. The White House, of course, has a huge head start in this realm going all the way back to George W. Bush and his “war on terror” — which is the intellectual equivalent to the CDC’s “zombie apocalypse.”

Both are entirely imaginary, yet useful as metaphors for the weak-minded.

The bottom line is that you and I should always be prepared to protect ourselves not only from unexpected events but also from the government’s bizarre, distorted attempts to feed our brains conveniently processed tidbits of disinformation.

And if zombies really do hit the streets, bring out your flamethrower and get to work like a contestant in a flame-broiled frying contest. Somebody has to save humanity during the next outbreak of mental madness, and it sure won’t be the CDC.