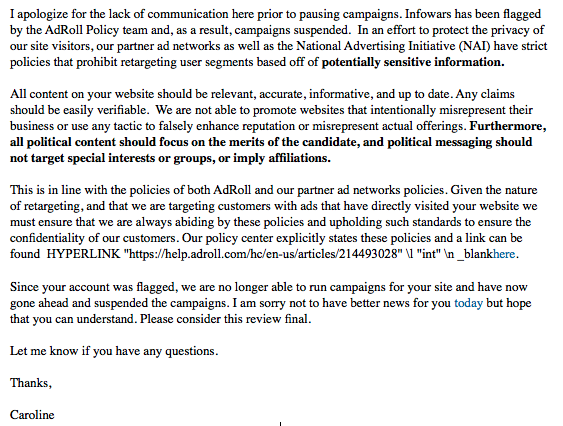 AdRoll, the online advertiser that accused Breitbart of “hate speech,” is now abruptly cutting ties with Infowars.com in an apparent, concentrated effort to shut down political speech by conservatives and libertarians online.

The advertiser sent a vaguely-worded email to the Infowars legal department saying it was ending its ad campaign in part because “all political content should focus on the merits of the candidate,” implying that corrupt, establishment candidates such as Hillary Clinton should be showered with praise and her scandals ignored.

This seems to contradict another statement in the same email in which AdRoll claims “all content on your website should be relevant, accurate, informative, and up to date;” if a news web site is to focus on only the “merits” of a political candidate and not the controversies, how is that accurate?

Here’s the email in full:

Interestingly, none of this verbiage is found on AdRoll’s “Website Content” guidelines page, indicating that it’s a new crusade to control political speech and news reporting through economic warfare.

AdRoll even slandered Breitbart by accusing the site of “hate speech,” which is not only an unprofessional accusation, but it also points to a political – not business – motivation behind the blacklisting.

“While we do let our customers determine which sites they’d like to block, we would like to clarify that AdRoll does not serve ads on Breitbart News because it violates our policies around offensive language and hate speech,” a company spokesperson said.

“Hate speech” is a ambiguous term often used by leftist politicians in the West to shut down the free speech of those critical of globalist initiatives, such as uncontrolled immigration which has lead to the erosion of national sovereignty in Europe and the US.

And it’s a phrase often used to smear President Trump, and what better way to turn public opinion against the president than by limiting competition to establishment media critical of him?

AdRoll’s campaign will only result in a media monopoly of mainstream outlets which are all controlled by a handful of mega corporations who favor a world-wide superstate controlled by an unelected network of titans in technology, media, government and academia, otherwise known as a technocracy.

With that in mind, it’s not surprising why the establishment hates Trump, who won the presidency with an “America First” campaign that promises to restore the country’s economic and national sovereignty.

And it’s also not surprising that AdRoll is partnered with Facebook and Google, two tech titans behind the technotronic takeover – and the “war against fake news” intended to shut down alternative press critical of globalism such as Infowars and Breitbart.

Some in the business, however, are not following along with the gameplan. In particular, Revcontent CEO John Lemp said the push to ban ads from certain news sites is censorship.

“Sensational headlines have been part of journalism for years,” he said.

Retraction: In a related story, an Infowars article briefly listed the company involved as ‘AdBlade’. This was a mistake. We confused two different companies with similar names. AdBlade is not involved in this issue. We apologize for this error.