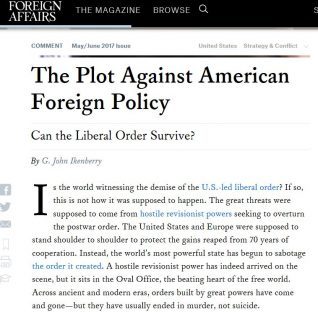 President Donald Trump is “a hostile revisionist power” at the heart of the free world dedicated to overturn the “U.S.-led liberal order,” according to Foreign Affairs – the mouthpiece of the globalist Council on Foreign Relations.

“The United States and Europe were supposed to stand shoulder to shoulder to protect the gains reaped from 70 years of cooperation. Instead, the world’s most powerful state has begun to sabotage the order of created,” wrote Gilford John Ikenberry, Professor of Politics and International Affairs at Princeton University and a member of the Council on Foreign Relations. “A hostile revisionist power has indeed arrived on the scene, but it sits in the Oval Office, the beating heart of the free world.” 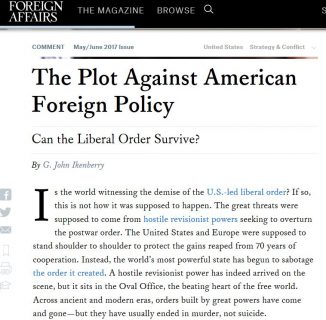 President Trump broke “70 years of tradition by signaling the end of U.S. support for the European Union” when he endorsed Brexit and expressed “common cause with right-wing European parties that seek to unravel the postwar European project,” Ikenberry added.

In order for the “liberal international order” to survive, Ikenberry called on its supporters to rally behind globalist leaders like Japanese Prime Minister Shinzo Abe and German Chancellor Angela Merkel to counter rising populist movements.

“The centrist and progressive governing coalitions that built the postwar order have weakened,” Ikenberry claimed. “Liberal democracy itself appears fragile, vulnerable in particular to far-right populism.”

“Much will rest on the shoulders of Prime Minister Shinzo Abe of Japan and Chancellor Angela Merkel of Germany, the only two leaders of consequence left standing who support it.”

When Ikenberry accuses Trump of “abdicating responsibility for the world the United States built,” he is actually referring to the world order created by globalist interests using American economic and military power.

By rejecting “internationalism” (a political principle rejecting nationalism), “free trade” (globalist bodies like the World Trade Organization and deals like the Trans-Pacific Partnership), “multilateral rules and institutions” (the UN, Bretton Woods monetary system, and environmental regulations), and “the multicultural and open character of American society” (open borders), Trump is launching a “frontal assault” on the global order.

Though Ikenberry admits the globalist world order was under siege prior to President Trump’s victory, he suggests those who support it will regain the upper hand if they “make it tough for Trump to pursue an ‘America First’ agenda.”