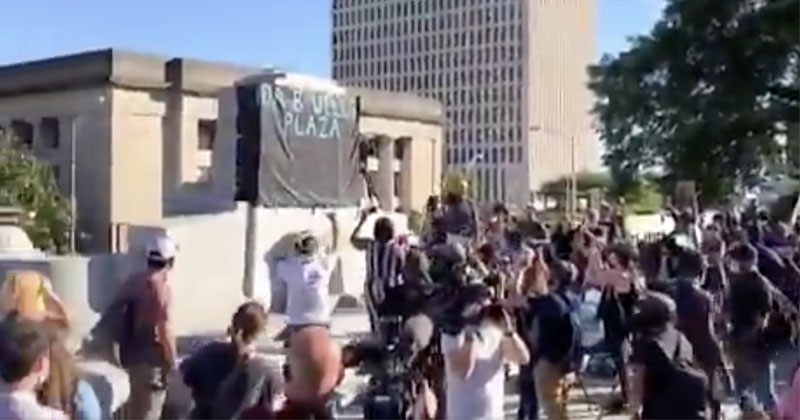 Taking cues from Seattle, protesters in Nashville are attempting to create their own “autonomous zone” near the Tennessee Capitol, but the governor is having none of it, warning that “lawlessness” will not stand in his state.

A small group of demonstrators showed up to Nashville’s Legislative Plaza near the state capitol on Friday, setting up a tent and tables, laying out food and even informally renaming the area to “Ida B. Wells Plaza” after the famed civil rights leader. The move mirrors a similar effort in Seattle, where activists have occupied several city blocks and an abandoned police station for nearly a week, fashioning an “autonomous zone” along the lines of an anarchist commune.

NOW: Protesters are setting up a “Capitol Hill #AutonomousZone” in #Nashville, they say reclaiming the people’s land. This is where protesters took down the Edward Carmack Statue on March 30th. They’ve now “renamed” Legislative Plaza “Ida B Wells Plaza.” @WKRN pic.twitter.com/d883UCtx1K

In videos shared online, a small crowd of activists could be seen at Nashville’s fledgling free zone, banging drums and chanting slogans in a festive atmosphere.

Some protesters plan to spend the night in the plaza, according to local media, despite a stern warning from the governor to clear out.

Unlike Seattle’s more abiding mayor – who has shown no willingness to interfere with the city’s protester encampment, even amid police complaints that it has interfered with their ability to respond to violent crime – Tennessee Governor Bill Lee immediately told the occupiers they would not be allowed to remain.

“As demonstrations continue, we will continue to protect Tennesseans’ right to peaceful assembly, while also reassuring citizens that lawlessness, autonomous zones, and violence will not be tolerated,” the governor said in a statement.

“Further, Tennessee law expressly prohibits camping on state property not expressly designated as a campground area, and that law will be enforced.”

Went to cover the protest in front of the Tennessee Capitol this evening. I was there until after dark. Peaceful… and I met some really nice people. #BlackLivesMatter #nashvilleprotest #Nashville pic.twitter.com/uMj7FTJ9aM

While it’s unclear if any effort has yet been made to remove the demonstrators, the job may become vastly more difficult on Saturday, when more than 5,000 people are expected to march on Capitol Hill, part of ongoing protests against police brutality sparked by the killing of George Floyd in May.