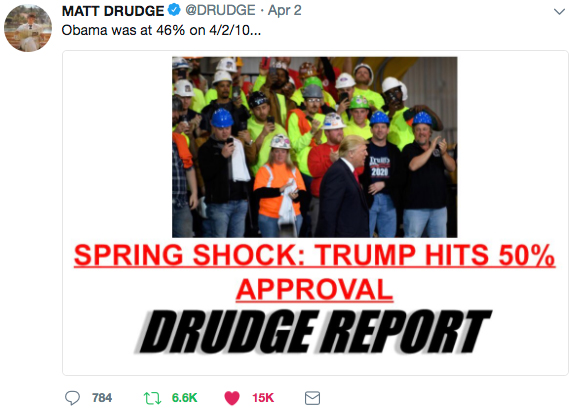 The new designation follows the results of a Rasmussen poll showing President Trump’s approval rating is higher than Obama’s at this same time in his presidency.

Thank you to Rasmussen for the honest polling. Just hit 50%, which is higher than Cheatin’ Obama at the same time in his Administration.

“Thank you to Rasmussen for the honest polling. Just hit 50%, which is higher than Cheatin’ Obama at the same time in his Administration,” Trump tweeted.

The Rasmussen Reports poll was highlighted Monday by media mogul Matt Drudge, who pointed out Obama’s approval rating “was 46% on 4/2/10.”

While Trump has regularly been critical of the Obama administration, on immigration, foreign policy and trade to name a few, this marks the first time he’s bestowed him an official nickname.

Trump’s latest devastating monicker is reminiscent of nicknames he devised for opponents during the 2016 presidential campaign, some of which were deemed “linguistic kill shots” by persuasion and hypnotism expert Scott Adams for their ultra-damaging effects. Among them, “Crooked Hillary,” “Crazy Bernie,” “Lyin’ Ted” and who can forget “Low-energy Jeb.”