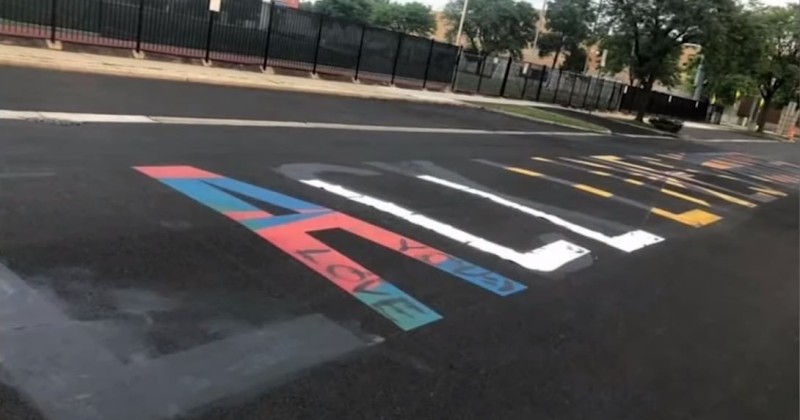 Peaceful protesters on Tuesday painted over a “Black Lives Matter” mural in Oak Park to make it read “All Lives Matter.”

The peaceful protesters were accused of “hate” and “racism” for their message of unity.

[…] Parts of the mural was painted over in order to make it read “All Lives Matter.”

I love how these youths act like they’re taking part in some anti-establishment revolution as they’re reciting propaganda slogans put out by the Fortune 500.

Whereas state-sanctioned “Black Lives Matter” graffiti is being painted on streets all over the country a couple who painted over one of these murals in Contra Costa Country was hit with hate crime charges.

Contra Costa County District Attorney Diana Becton on Tuesday charged the peaceful protesters seen painting over a city-approved Black Lives Matter street mural with a hate crime and is seeking to put them in prison for a year.
https://t.co/zH5P8ZL2Mj

There are people getting fired from their jobs for tweeting “All Lives Matter.”

If Corporate America is pouring 1.7 billion into your coffers you’re not fighting a revolution against the system.

The more I think about what’s occurred since the corona-shutdown began the more it seems like this effort to spark a race war is just to divide and conquer the masses to keep them from uniting against the $6 trillion bailout which Rep Thomas Massie accurately predicted would be the “largest wealth transfer from taxpayers to the super rich” in American history.

The recent surge in the price of Amazon's shares has propelled Jeff Bezos’ wealth higher than it was prior to his divorce when it decreased by 25% as part of a divorce settlement with Mackenzie Bezos, who has also become the world’s second-richest woman.https://t.co/kLo1sEx1b4

The biggest companies in America looted the treasury for trillions, had all their competition deemed “unessential” and forcibly shut down for months on end (while nearly everyone’s stimulus checks went straight to them) and then pushed this Cultural Revolution to distract from their crimes and shut down all dissenters in the name of fighting “hate” and “misinformation.”