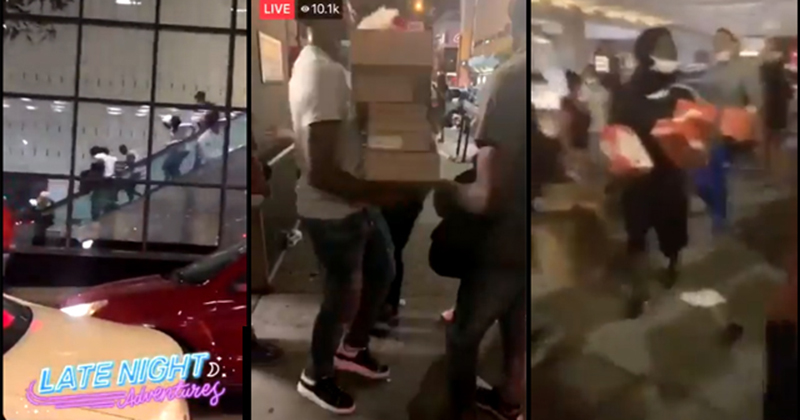 Mass looting and rioting broke out in Chicago on Sunday night after a reportedly armed black suspect in his “late teens or early 20s” was wounded in a shootout with police in Englewood.

Any excuse to loot will do.

WERE BACK AT IT AGAIN VIDEO FROM USER SHOWS THEIRS A TON AND WHEN I MEAN A TON THEIRS A LOT OF STORES BEING LOOTED RN IN CHICAGO!#CHICAGO #CRAZY #RIOTS #LOOTING #RIOTS2020 #chicagoriots #LOOTERS #COPS #STORES pic.twitter.com/LNAtbxkWaM

Rioters tried to hit police with their cars:

Rioters in Chicago tried to hit some cops with their car. #ChicagoProtests 🤯🤯pic.twitter.com/awy1xkozph

A cop was hit in the face with a giant object to cheers.

Cops are being attacked in Chicago tonight.

There were shots fired:

Massive looting all over downtown #Chicago. I swear, they have hit every and any store they wanted. 🤯🤯 pic.twitter.com/71NXM9U0hc

How dumb do you have to be to live stream yourself looting. #Chicago pic.twitter.com/uQ1gOWlxyK

Looter shouts “I can’t breathe” as she runs through store looking for something to remove security tags. #Chicago pic.twitter.com/uElON1OYmf

How does this fit with the media’s narrative that black people are “terrified” that police will shoot them at any moment for any reason without the slightest provocation?

Do any of these folks look “terrified” that police are going to shoot them at any moment just for the “crime” of “being black”?

There are literally hundreds of looters in Chicago right now, hitting all the stores. pic.twitter.com/rXpdhZFEOZ

Insanity, and this is over a police shooting of an armed suspect. #Chicago pic.twitter.com/JVheab3Bxx

Lots of people stealing bread for their families tonight in Chicago. Boxes and boxes of bread #Chicagoriots pic.twitter.com/Ea6bdyWEuG

Rioters were seen egging each other on to attack police.

Do any of these folks look like they’re grieving over someone being shot?

Chicago streets flooded by looters. Came in cars. Rampant looting of all luxury stores in downtown. I made this video from my room pic.twitter.com/AuNgkpA7dm

This is the gun police say was dropped by the shooter in Englewood.