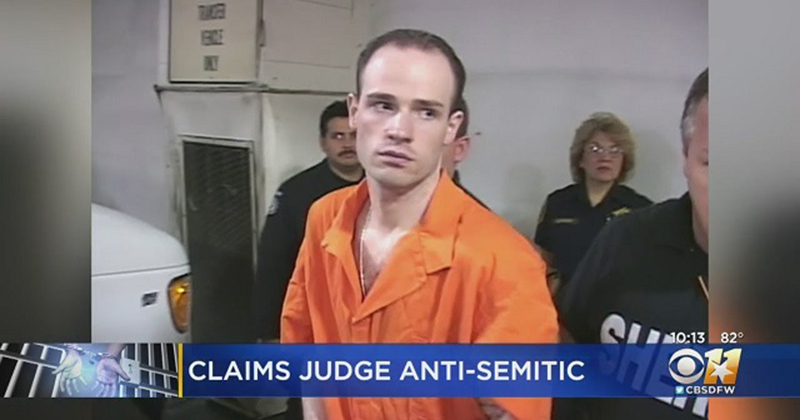 Jewish prisoner Randy Halprin confessed to severely beating an 18-month-old toddler in 1996 and fracturing the boy’s skull and was sentenced to 30 years in prison before breaking out and murdering a police officer in 2000.

Halprin was scheduled to be executed on October 10th but the Anti-Defamation League and “100 Jewish attorneys from Dallas and throughout the state” rallied to his defense and got a stay of execution by accusing his judge of being “antisemitic.”

The Texas Court of Criminal Appeals on Friday stayed the upcoming execution of Randy Halprin, one of the two surviving Texas Seven members on death row.

The 42-year-old Halprin, one of seven prisoners who escaped from the John B. Connally Unit on Dec. 13, 2000, was scheduled to die Thursday for his role in the slaying of Irving police officer Aubrey Hawkins 11 days later. But his attorneys, with the support of 100 Jewish attorneys from Dallas and throughout the state, argued in recent weeks that Halprin, who was raised Jewish in Arlington’s Congregation Beth Shalom, was sentenced to death by a bigoted judge whose “anti-Semitic views of Mr. Halprin created an unconstitutional risk of bias.”

That judge was Vickers “Vic” Cunningham, who is alleged to have called Halprin “that [expletive] Jew” and much worse during the trial.

Cunningham denied the allegations made by Halprin’s attorneys, telling The Dallas Morning News in June that his alleged anti-Semitic comments are “fabrications” and “the same lies from my estranged brother and his friends.”

But the court took the allegations seriously enough to remand the case back to a Dallas County court for further review.

When reached at his Gaston Avenue law office Friday afternoon, Cunningham said he had “been informed” of the court’s ruling.

When reached by phone, Halprin’s public defender, Tivon Schardl, said only that he and his client were “very grateful the Court of Criminal Appeals made it clear bigotry won’t stand in Texas criminal courts.”

[…] Before his escape from prison in 2000, Halprin was serving 30 years for beating a child in Tarrant County. He has never denied he was at the Oshman’s Sporting Goods store, at State Highway 183 and Belt Line Road, on Christmas Eve 2000, when Hawkins was shot 11 times and then run over. But he has denied being one of the men who pulled the trigger that night.

“By the way, we’re currently running our biggest sale since Christmas! Get 50% off products with double Patriot Points and free shipping during our Black Friday Comes Early Sale!”

This is who they’re fighting to save.

By August 1996, he was living in an Arlington apartment with a group of people he had met in a homeless shelter. To pay his rent, Randy would babysit the 18-month-old son of one of his roommates. One night the child was found severely beaten, suffering two broken legs, two broken arms, and a skull fracture. Under police questioning, Randy at first suggested the child’s mother was to blame. He said she was always going out and getting “messed up” and neglecting her toddler.

He stuck with that story until he flunked a polygraph. When he broke down and confessed, he described how he’d beaten and kicked the child when the child wouldn’t stop crying. He even imitated the high-pitched voice the toddler used as he called for his mother. “He was mocking him,” Fort Worth police detective Renee Kamper testified years later. “I’ll probably never forget it.” There were also wounds on the child’s tongue that a doctor testified were consistent with burns from a match or cigarette.

“Randy would never confess to that part, the torture,” Shook says.

I guess considering Halprin doesn’t appear to have called the boy he tortured or the cop he killed a racist or bigoted name he should be free to go!