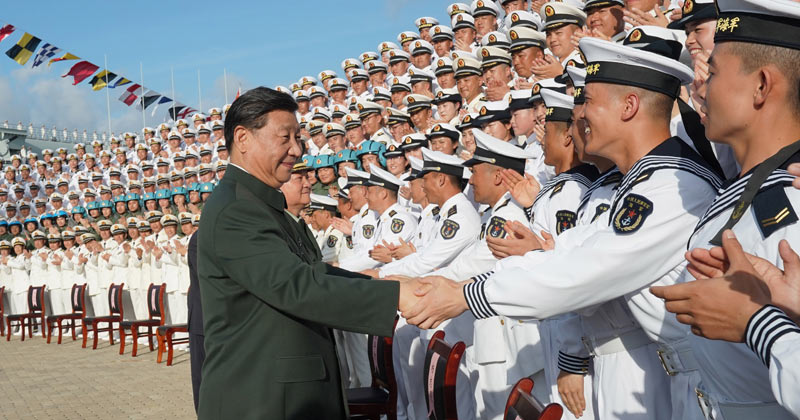 China might soon shift the world naval balance and unseat the US as the modern master of the seas. The process appears to already be under way, and there is little that Washington can do about stopping it.

Visibly shaken by what it has seen on a photo showing just one of China’s military shipyards near Shanghai, the business magazine Forbes recently told its readers an alarming story about the “impressive rate” and “vast scale” of Chinese naval modernization.

The shipyard in question indeed appears to be an impressive sight to behold. There, one can see a total of nine newly constructed destroyers lined along the quay and docked in an inner shipyard basin. By contrast, the entire UK Royal Navy has a total of just six similar-class vessels, Forbes notes.

As if it was not enough, the same shipyard is also building China’s newest aircraft carrier – the third in a row. The second one, called the Shandong, was commissioned by the People’s Liberation Army Navy (PLAN) earlier this week. Designed to carry 36 J-15 fighter jets, it is China’s first fully domestically produced carrier.

The one under construction at the Shanghai shipyard is expected to be even bigger and better. In particular, it will have an electromagnetic catapult – just like the US Navy’s newest carrier, USS Gerald R. Ford.

More importantly, this one shipyard is but a sneak peek into China’s real capabilities as there are “many yards across China, which are similarly impressive,” Forbes warns its readers.

What might have come as a surprise for Forbes has been occupying the minds of all sorts of analysts for quite some time. The US media and think tanks alike are all united in their concerns about Beijing’s growing military power.

In June, the Center for a New American Security (CNAS), a Washington-based think tank, argued that China’s industrial and technological capabilities might help it “beat the Americans at their own game” and get an edge in the new arms race.

“The Soviets were never able to match, much less overcome, America’s technological superiority. The same may not be true for China,” warns the CNAS paper, adding that Beijing “strives to achieve technological parity, and eventually technological dominance.”

Similarly, a whole range of media outlets from The Diplomat to the National Interest spared no efforts telling their readers that China’s military modernization poses “a challenge” to the US and gives Washington “good reasons” to worry. Harvard Policy Review made a step further and wondered whether Beijing’s strategy could put it on a “path to hegemony,” eventually admitting that it mostly depends on “how far China is willing to go.”

Meanwhile, the RAND Corporation – a premier US military think tank — showed in its research that China’s rapid military development program has already allowed it to drastically close the gap in power and technology, and even to put the US at a disadvantage in certain scenarios.

The think tanks and the media apparently believe it is high time Washington started worrying about losing its military superiority to the Chinese dragon, which seems to be just spreading its wings. But when it comes to naval power, it might already be too late.

Beijing has made its naval forces the cornerstone of its military modernization, analysts tell RT. China is actively pursuing the role of a global military power able to project its force to any corner of the earth, and the US may not have the sheer industrial capacity to compete.

“It is easier for China to increase its fleet numbers as it is the world’s biggest shipbuilder. They have immense shipyard capacities, which the US lacks, as its commercial shipbuilding has been thrown into disarray over the past decades,” says Vasily Kashin, Far East researcher at the Russian Academy of Sciences.

One cannot even count all the ships being built there. The modern Chinese program is unrivaled throughout the world and the Americans cannot even dream of such pace.

Khramchikhin believes that Beijing might be able to rival Washington in terms of the sheer fleet size in a decade or so. He particularly noted that China has been able to build frigates, corvettes and even destroyers by the dozen over the past decades.

“Ten years ago, the US had 15 aircraft carriers and China had none. In ten years, they might become even… They have more shipbuilders than the rest of the world together.”

One advantage the US would seem certain to hold on to is technological superiority. It could try to curb China’s emerging naval might by limiting Beijing’s access to modern technologies. That strategy is unlikely to work, the analysts believe, as China already has some cutting-edge technologies it could easily develop further. Besides, it can also approach its strategic partner, Russia.

“They make great technological advances,” Kashin says. He points that the Chinese were the second nation in the world to equip their ships with integrated universal weapons systems rivaling America’s Aegis – an advanced command and control system using powerful computers and radars to track and guide the vessels’ weapons.

Khramchikhin believes that Chinese naval technologies are already in many ways comparable to those of the US. “When it comes to surface ships, the Chinese already have some of the most advanced technologies.”

It is true that some military technologies are difficult to master and take decades to develop. It is particularly relevant in the case of submarines, a field where China is still trailing the US. Here, however, close cooperation between Beijing and Moscow might tip the scales, the analysts believe.

Most recently, Russian President Vladimir Putin told an end-of-the-year press conference in Moscow that Russia will continue to work with China as a “strategic partner” in the field of defense technologies, even though he denied any plans on entering a formal military alliance with Beijing.

“Some joint development projects, sophisticated equipment components… these can all come from Russia,” Kashin believes.

Washington might slow Beijing down a bit at some point, but the way things look now, the US doesn’t seem to have any credible means to prevent China from becoming the world’s next naval superpower in a decade or two.