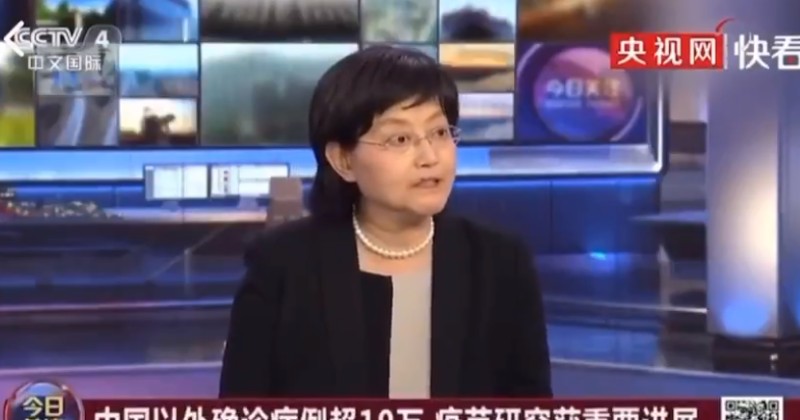 While the U.S. media continues to obsess over Trump calling COVID-19 the ‘Chinese virus’, China itself continues to claim that America is to blame for releasing the coronavirus.

A clip from Chinese state television shows an “expert” claiming, “The US pushed out the vaccine so quickly, that only means they have been working on it way before the pandemic.”

“So we can conclude that the US had this virus in their possession long ago,” responds the host.

Central China TV
“Expert” : “The US pushed out the vaccine so quickly, that only means they have been working on it way before the pandemic.”
Host: “So we can conclude that the US had this virus in their possession long ago”

This follows a claim by China’s Foreign Ministry spokesman Zhao Lijian, who suggested the U.S. military was to blame for coronavirus. The Chinese government not only refused to disavow Lijian, they endorsed his conspiracy in official Communist Party mouthpieces.

You’d think that a media which has been obsessed with “foreign meddling” and “fake news” for the past four years would be interested in a foreign power spinning a fake news conspiracy theory that the U.S. is to blame for a global pandemic.

Instead, they’ve completely ignored the story, with some even insisting that Trump’s claim Beijing is blaming America is completely made up.

Major news networks are also hailing China’s response as a “lesson” to the U.S., failing to mention the fact that China lied to the world 2 months ago in claiming there was “no evidence” of human-to-human transmission while their failure to act quick enough, according to a study, resulted in a lost opportunity to have reduced the global geogrpahic spread of coronavirus by 95 per cent.

In some cases, they’ve even mirrored and amplified the Chinese Communist Party’s rhetoric in claiming that blaming China for coronavirus, despite the fact it originated in China and China covered it up for over a month, is also a form of “racism.”

Hillary Clinton’s tweets on the matter are difficult to distinguish in tone from Chinese state media.

Silicon Valley, which constantly lectures Americans about the all-pervasive power of “Russian bots” has also remained completely silent on clear evidence that Chinese bots are being used to further this conspiracy.

Apparently, Trump potentially offending Chinese people is more important to the press than a hostile foreign power launching a propaganda offensive to blame America for releasing a deadly virus.