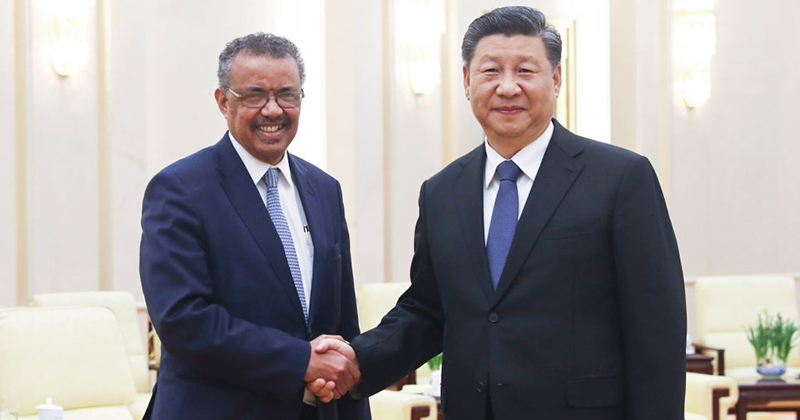 German intelligence has revealed that Chinese President Xi Jinping asked World Health Organization (WHO) Director-General Tedros Adhanom Thebreyesus to cover up the severity of the coronavirus pandemic in January, according to Der Spiegel.

During a January 21 conversation – one week after the WHO assured the world there was ‘no clear evidence  of human-to-human transmission’ – Xi reportedly asked Tedros not to reveal that the virus was in fact transmissible between humans, and to delay declaring that the coronavirus had become a pandemic – despite the virus qualifying as one by the WHO’s own former guidelines.

Head Forensic Medicine in Hamburg, Germany calls out COVID lies of Merkel & Trump on live TV. He analyzed EVERY “Coronavirus death” in Hamburg. Here’s what he found…

And while the WHO announced on the 22nd that data collected through their own investigation “suggests that human-to-human transmission is taking place in Wuhan,” which they said more analysis was required “to understand the full extent,” they waited all the way until March 11 to declare the virus a pandemic.

It is now widely recognized that China’s political culture of secrecy helped to turn a local viral outbreak into the greatest global disaster of our time. Far from sounding the alarm when the new coronavirus was detected in Wuhan, the Communist Party of China (CPC) concealed the outbreak, allowing it to spread far and wide. Months later, China continues to sow doubt about the pandemic’s origins and withhold potentially life-saving data.

In mid-January, the body tweeted that investigations by Chinese authorities had found no clear evidence of human-to-human transmission of the virus. Taiwan’s December 31 warning that such transmission was likely happening in Wuhan was ignored by the WHO, even though the information had been enough to convince the Taiwanese authorities – which may have better intelligence on China than anyone else – to institute preventive measures at home before any other country, including China.

The WHO’s persistent publicizing of China’s narrative lulled other countries into a dangerous complacency, delaying their responses by weeks. In fact, the WHO actively discouraged action. On January 10, with Wuhan gripped by the outbreak, the WHO said that it did “not recommend any specific health measures for travelers to and from Wuhan,” adding that “entry screening offers little benefit.” It also advised “against the application of any travel or trade restrictions on China.”

Even after China’s most famous pulmonologist, Zhong Nanshan, confirmed human-to-human transmission on January 20, the WHO continued to undermine effective responses by downplaying the risks of asymptomatic transmission and discouraging widespread testing. Meanwhile, China was hoarding personal protective equipment – scaling back exports of Chinese-made PPE and other medical gear and importing the rest of the world’s supply. In the final week of January, the country imported 56 million respirators and masks, according to official data.

It’s no secret that China engaged in a massive cover-up as the Wuhan coronavirus spiraled out of control. At the same time, the CCP allowed tens of thousands of people to travel for the Chinese Lunar New Year.

As the situation continues to evolve and narratives are shaped, take a close look and remember who’s defending who.