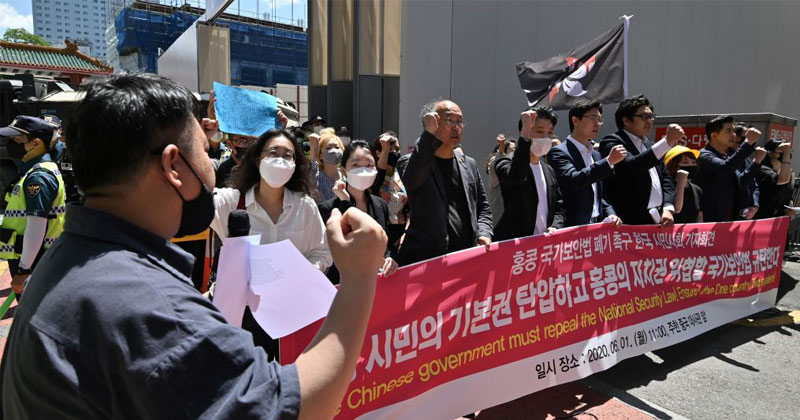 Many fear that will dismantle the city’s political freedoms and which will criminalize broadly worded offenses such as sedition, subversion and foreign interference.

Beijing’s decision to bypass Hong Kong’s legislature has been heavily criticized by the British government, which signed an agreement in 1984 to ensure that Hong Kong remains autonomous from Beijing, except in matters such as defense.

The unprecedented move, which Johnson said he would implement when China formally enacts the security law, could emerge as among the most significant ramifications of Beijing’s effort to undercut Hong Kong’s freedoms and bring the city more closely under Communist Party rule. It would potentially grant British residency and working rights to up to 40% of Hong Kong’s population, raising the specter of a brain drain from the Asian financial center.

“Many people in Hong Kong fear their way of life—which China pledged to uphold—is under threat,” Johnson wrote in an op-ed that appeared Wednesday in the Times of London newspaper and Hong Kong’s South China Morning Post. “If China proceeds to justify their fears, then Britain could not in good conscience shrug our shoulders and walk away.”

Johnson’s vow comes as the United States, Canada, Australia and others face pressure from lawmakers and human rights groups to offer residency to Hong Kong people fleeing deteriorating political circumstances in the former British colony, which was promised a high degree of autonomy under the terms of its 1997 handover to China.

Johnson wrote that his government would allow holders of British National (Overseas), or BNO, passports to come to Britain for a renewable period of 12 months and gain the right to work. The move “could place them on a route to citizenship,” he said.

These passports, a holdover from British rule issued to people born before 1997, currently allow holders to stay in Britain for six months but do not afford work rights or residency. About 350,000 of Hong Kong’s 7.5 million residents hold British National Overseas passports, to which people who were citizens of Hong Kong before Britain returned the city to Chinese rule in 1997 are entitled.Johnson said a further 2.5 million people are eligible to apply for them, adding up to about 40% of Hong Kong’s population. Holders of those passports can visit the U.K. for a period of six months but currently don’t have the automatic right to live or work in the country.

That said, it is not clear exactly how immigration laws would be changed or if the U.K. would fully open its doors to the 2.8 million Hong Kong residents potentially eligible for a British National Overseas passport. It isn’t currently permitted to hold a British National Overseas passport while holding the nationality of another country. British Foreign Secretary Dominic Raab said on Tuesday that the U.K. had discussed with allies including Australia, Canada and the U.S. the possibility of “burden sharing if we see a mass exodus from Hong Kong.” He didn’t indicate any outcome of the discussions.

China, naturally, was not happy with this turn of events.

In response to the BoJo op-ed, China’s Foreign Ministry said Wednesday that Britain has no jurisdiction over Hong Kong. Britain must “step back from the brink” and “stop interfering in Hong Kong’s affairs and China’s internal affairs,” spokesman Zhao Lijian told reporters.

Hong Kong’s Office of the Commissioner of China’s Ministry of Foreign Ministry added that “the U.K. has no sovereignty power, nor does it have power of governing or “supervision” over Hong Kong after the region’s return to China” adding that “no terms in the Sino-British Joint Declaration grant rights to U.K. to interfere in Hong Kong affairs” and that “any foreign nations including the U.K. should not use the Joint Declaration as an excuse to meddle in Hong Kong affairs: statement.”

Needless to say, China has been especially critical with the proposal since Britain first floated the idea last week, and has denied that the security law breached the 1984 agreement with Britain. It has said it reserved the right to take unspecified “corresponding action.”

Comment on the proposal, Rabobank’s Michael Every was laconic, and warned that this is just the last geopolitical flashpoint that markets are clearly ignoring:

the UK is lobbying the 5-eyes Anglo group to allow millions of Hong Kongers to leave for Britain (who will take 2.9m), the US, Canada, Australia and New Zealand: what does that suggest about the outlook?

As the former colonial ruler, London was a signatory to the Sino-British Joint Declaration in which China agreed to preserve Hong Kong’s political freedoms and way of life until 2047.