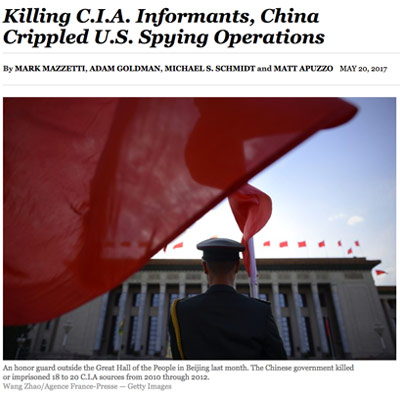 More than a dozen CIA sources in China were killed or imprisoned between 2010 and 2012 after US spy operations were compromised, the New York Times reports.

The highly-effective crack down, described by current and former US officials as one of the worst intelligence breaches in decades, sparked a joint CIA-FBI investigation into how the sources’ identities became known to the Chinese.

“Some were convinced that a mole within the C.I.A. had betrayed the United States,” the article states. “Others believed that the Chinese had hacked the covert system the C.I.A. used to communicate with its foreign sources. Years later, that debate remains unresolved.”

Between late 2010 and late 2012 more than a dozen CIA assets were killed – one of whom who was shot in a courtyard outside a government building – while 18 to 20 were imprisoned by China, three officials said.

The severity of the breach has been compared to the losses incurred during the Cold War, specifically the cases involving Aldrich Ames and Robert Hanssen.

“The number of American assets lost in China, officials said, rivaled those lost in the Soviet Union and Russia during the betrayals of both Aldrich Ames and Robert Hanssen, formerly of the C.I.A. and the F.B.I., who divulged intelligence operations to Moscow for years,” the Times writes.

The US investigation, code-named Honey Badger, eventually led to a former CIA operative who had moved to another Asian country after leaving the agency’s division overseeing China. The investigation failed to gather enough evidence to warrant an arrest, several officials said.

The Times report also states that Chinese spies were able to compromise the NSA in Taiwan after infiltrating the country’s intelligence service.

“Around that time, Chinese spies compromised National Security Agency surveillance in Taiwan — an island Beijing claims is part of China — by infiltrating Taiwanese intelligence, an American partner, according to two former officials.”

Although the source of the breach was never determined, several FBI agents blamed poor CIA tradecraft for the fallout in China.

“Some F.B.I. agents became convinced that C.I.A. handlers in Beijing too often traveled the same routes to the same meeting points, which would have helped China’s vast surveillance network identify the spies in its midst,” the Times states. “Some officers met their sources at a restaurant where Chinese agents had planted listening devices, former officials said, and even the waiters worked for Chinese intelligence.”

While the FBI and CIA were able to lure the suspected mole back to the United States in 2012, the investigation once again failed to lead to an arrest.

“Agents questioned the man, asking why he had decided to stay in Asia, concerned that he possessed a number of secrets that would be valuable to the Chinese…” the article notes.

“The man defended his reasons for living in Asia and did not admit any wrongdoing, an official said. He then returned to Asia.”

The CIA has since struggled to rebuild its network of sources inside the Chinese government.