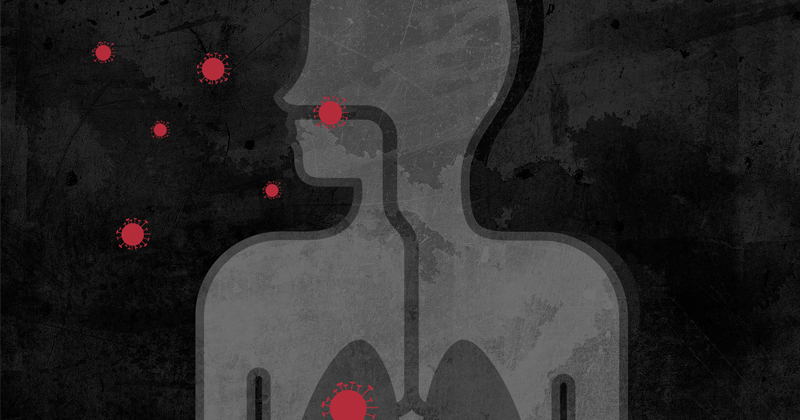 Editorial note: To all national security personnel reading this from Taiwan, Japan, Korea, Canada, the USA, Russia and other nations, you will want to urgently forward this to your commanding officers, as this story is verified and true, confirmed through our Taiwan investigators. It indicates a dangerous, global escalation of warfare tactics by a lawless, authoritarian regime that you already know has been dispatching spies to your countries, stealing intellectual property and infiltrating your universities, governments and military weapons research institutions. China’s end game goal is world domination, and there is no weapon they won’t deploy to achieve it.


On the heels of the bombshell revelation that China has been engineering an “offensive biological warfare weapon” that accidentally escaped their BSL-4 facilities and launched a global pandemic, we are now getting confirmation from our investigators in Taiwan that China has deployed a biological warfare attack against Taiwan by seeding an evacuation flight of Taiwan citizens with an infected “Trojan horse” human weapon who contaminated the entire evacuation flight.

This is a damning escalation of tensions between communist China and Taiwan as the coronavirus pandemic explodes, nearly doubling the number of confirmed infections every 3.5 days (i.e. exponential, self-sustained pandemic outbreak).

As part of an evacuation operation carried out by the government of Taiwan, the communist Chinese government refused to allow Taiwan to charter its own plane to rescue its citizens from the Wuhan region. China demanded that its own airplane be used, refusing to follow the Taiwan government’s request that “old women, women with children and children” should be the priority of evacuees allowed to take the flight.

Instead, China placed three passengers on the flight who were not on Taiwan’s list of citizens, and one of those individuals, completely unknown to Taiwan, turned out to be infected with coronavirus.

China now trying to spread the coronavirus across Taiwan

The covert operation appears to be a biological warfare attack on Taiwan by the communist Chinese regime, which deliberately intended to infect the entire flight with coronavirus so that infected passengers would further spread the pandemic in Taiwan. Such actions, of course, violate international laws, the Geneva Convention and various international treaties that outlaw the deployment of biological weapons.

When senior media person Cai Yuzhen accepted an interview with “Faith” today, he criticized the Chinese side for a series of actions that were “black box operations”…

…there was no protective measures for the entire charter plane, and no one knew who was infected. It was not until the passengers returned to Taiwan for examination that one person was confirmed [infected]. “This charter flight took two hours. The virus is inserted into the charter flight, the rest of the passengers become a high-risk group. What can you say to them? It’s a helpless situation. How can we use the original method to evacuate the rest of the people? “The worst part is how can a confirmed case get on the flight? Once it’s on the flight, it’s treated the same as the rest of the people, there’s no quarantine. Can you still trust this kind of China?”

The Minister of Health Fu Chen Shizhong who did his best to prevent epidemics was sentimental and wept, because a confirmed case was like a black hole in epidemic prevention on an unprotected charter plane. It caused him to shed tears [for the safety of the people of Taiwan]…

Here’s the original Chinese article, for those who are able to read it: 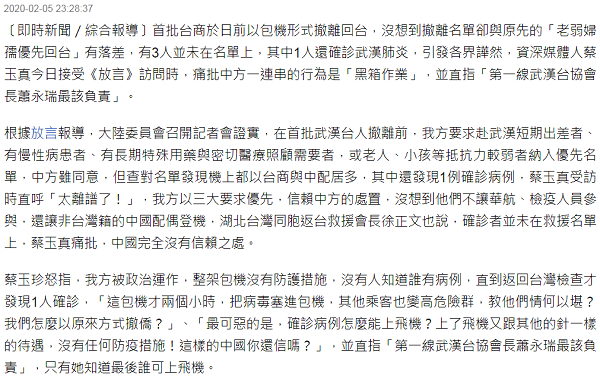 It now appears China is attempting to export its pandemic to Taiwan by swapping seeding evacuation charter flights with “human weapons” who are known to be infected with the coronavirus. Given that China already realizes its economic and political future is now uncertain in the face of an exploding pandemic that has likely killed at least 25,000 Chinese, the deceptive communist regime appears to be attempting to cause the maximum damage to Taiwan as a form of lashing out against its political enemies as its own domestic situation turns to chaos.

The nCoV strain of the coronavirus was genetically engineered by Chinese scientists to create the perfect biological warfare weapon, which would one day be deployed against the United States, stunning new investigations have revealed. This underscores China’s philosophy of achieving the extermination of its political enemies using horrifying weapons of death and destruction. This is why China’s sudden biological warfare “Trojan horse” attack on Taiwan should come as a surprise to no one.

Taiwan is working feverishly to protect its citizens from the malicious, criminal actions of the mainland Chinese regime, but given that China is willing to deploy “pandemic sleeper cells” on Taiwan evacuation flights, the Taiwan government is now facing an enormous burden to screen, quarantine and treat patients who may be in various stages of the coronavirus incubation.

For this effort, the communist Chinese regime should be labeled a criminal regime that is committing crimes against humanity, yet the compromised W.H.O. remains committed to China, even absurdly praising China for its “transparency.”

Every institution in America — from Hollywood to the tech giants and even the U.S. Senate — seems to be running cover for China, one of the most inhumane, cruel authoritarian regimes in the history of our world. China routinely kidnaps innocent civilians, subjects them to rape and torture, murders political enemies, runs “education” camps that imprison Muslims, and even runs organ harvesting factories to generate profits from the international black market of human organs.

China also routinely bullies Taiwan and even threatens global corporations with retribution if they do not bow to the demands of the communist regime. By any reasonable standard, China is truly one of the most dangerous, evil and destructive regimes on our planet, and it proves that designation yet again by illegally deploying a human weapon biological warfare attack against Taiwan.

Why is there no outcry from the United Nations or the WHO? Where is the outcry from the scientific community? Where is the coverage in the mainstream media? It’s nowhere to be found, because all the corrupt, criminal institutions of our world have already sold out to the communist Chinese regime. (Much of the controlled U.S. media is now run by communists. CNN is now called the “Communist News Network.”)

Surely China’s biological warfare attack on Taiwan should trigger a considered response from the United States, but so far, no one is even acknowledging this incident has taken place, since it’s not reported anywhere in the (controlled) U.S. media. President Trump is likely not even aware this has happened.

The entire mainstream media is lying to you about the coronavirus pandemic and China in particular. But you already knew that, of course.

Fascinatingly, media lies about the coronavirus seem to be spreading almost as fast as the virus itself.