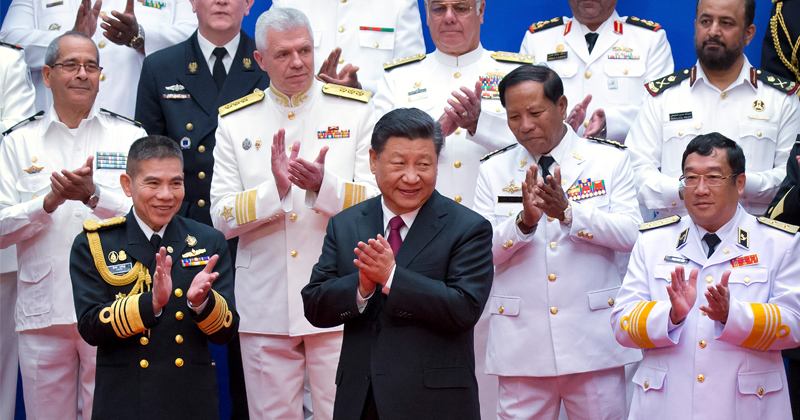 On Wednesday, former US Navy SEAL Adm. William McRaven noted the “gap is narrowing” between the US and China technologically, referring to it as a “holy s**t” moment.

He advises that if the US doesn’t double down on science and technology education and act decisively to forestall Beijing’s rise, it will soon leave Washington in the dust.

McRaven, who as Joint Special Operations Command chief in 2011 oversaw the Pakistan raid that killed al-Qaeda mastermind Osama bin Laden, presented a new report to the Council on Foreign Relations think tank Wednesday. Titled “Innovation and National Security: Keeping Our Edge,” the report raises the alarm about China closing the technological gap with the US and points to key ways that China is excelling and how the US is failing to keep pace.

“We need to make sure that the American public knows that now is the time to do something,” he said in remarks at the think tank. The problem, he says, is that there is no “Sputnik” moment to spark urgency in a nationwide effort to maintain the US’ tech lead.

“China, now the world’s second-largest economy, is both a US economic partner and a strategic competitor, and it constitutes a different type of challenger,” the report’s executive summary notes. “Tightly interconnected with the United States, China is launching government-led investments, increasing its numbers of science and engineering graduates, and mobilizing large pools of data and global technology companies in pursuit of ambitious economic and strategic goals.”

“The United States has had a time-tested playbook for technological competition,” the report says, noting the country’s pattern of deep investments in research and development (R&D), science, technology, engineering and mathematics (STEM) education and attracting and retaining experts from around the world.

However, the US “faces a critical inflection point” in all these fields, the report notes. “US leadership in science and technology is at risk because of a decades-long stagnation in federal support and funding for research and development. Private-sector investment has risen, but it is not a substitute for federally funded R&D directed at national economic, strategic, and social concerns.”

PTSD Blood Tests have been proposed to see if vets have the heightened aggressive and anxious traits of a victim of PTSD to prevent them from buying guns.

Moreover, the “steady pipeline” of domestically cultivated STEM talent and retention of experts from abroad has broken down amid “a lack of strong education initiatives at home and new barriers to talented foreign students’ and workers’ coming to and remaining in the United States,” the report says, noting this will have “long-term negative economic and national security consequences.”

“The Task Force believes that the government and the private sector must undertake a comprehensive and urgent response to this challenge over the next five years. Failure to do so will mean a future in which other countries reap the lion’s share of the benefits of technological development, rivals strengthen their militaries and threaten US security interests, and new innovation centers replace the United States as the source of original ideas and inspiration for the world,” the report says.

The task force’s conclusions mirror those of Gen. Mark A. Milley, US President Donald Trump’s pick to replace Gen. Joseph Dunford as chairman of the Joint Chiefs of Staff next month. At his July confirmation hearing, Milley told the Senate Armed Service Committee he believes the “central theme” of the next century “will be the relationship between the United States and China.”

China is bragging about taking Taiwan by force. This is a major development on the world stage. However, the Mainstream Media is so controlled by foreign and Chinese influence that coverage of this major event is barely being documented. Only a handful of alternative media sites have the wherewithal to address the impending danger facing the globe.

Like McRaven, Milley noted the complex, interconnected relationship between the US and China, which do not exist in strictly bifurcated economic spheres like the US and the Soviet Union did.

“An enemy in my language, military language, means you’re in an act of armed conflict, you’re at war. We’re not there. We don’t want to be there. We want peace, not war, with China. But having said that, I think that the best way to do that is to make sure that we are prepared,” he said. “China is improving their military very, very rapidly — in space, air, cyber, maritime, land domains. They’re outspending us in research and development and procurement … We, the United States, need to make sure that we do not lose our advantages that we have relative to other countries, specifically relative to China.”

Likewise, a June report by the Center for a New American Security described a three-tiered plan by Beijing to catch up with, meet on equal terms and then exceed US technical capabilities specifically in the field of defense by 2049. A July 2017 plan by China’s State Council laid out a roadmap for turning the socialist country into a world leader in artificial intelligence by 2030, setting aside nearly $60 billion to develop the core of a new AI industrial sector, but that number could increase possibly tenfold once satellite industries are taken into account, Sputnik reported.

Expert Forecast: The Collapse Of Civilization

Matt Bracken hosts The Alex Jones Show to give you his overview of the collapse of civilization from Wal-Mart’s corporate welfare, to the devastation from hurricane Dorian.