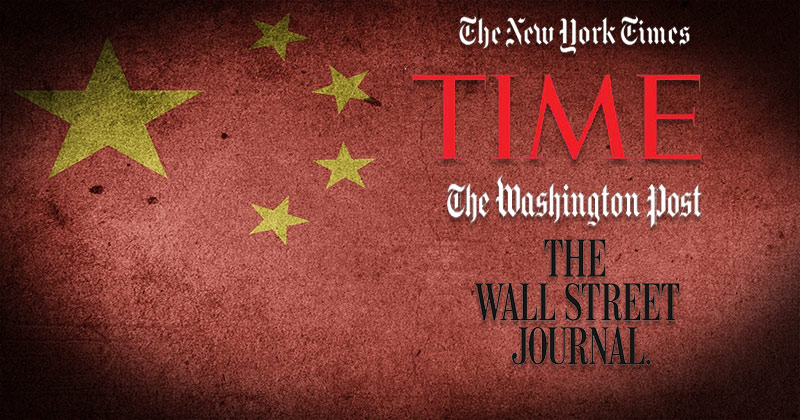 The Chinese Communist Party has ordered the expulsion of The New York Times, Washington Post, and other American news outlets from the country Tuesday amid speculation that it’s covering up the true origins and scale of the coronavirus pandemic.

The Times, The Post, The Wall Street Journal, Time Magazine, Voice of America must leave China within days in response to the Trump administration’s actions against China’s state-run media in the U.S, according to China’s Foreign Ministry.

These actions “are entirely necessary and reciprocal countermeasures that China is compelled to take in response to the unreasonable oppression the Chinese media organizations experience in the U.S. They are legitimate and justified self-defense in every sense. What the U.S. has done is exclusively targeting Chinese media organizations, and hence driven by a Cold War mentality and ideological bias,” a Foreign Ministry spokesman said.

This comes after the U.S. moved to restrict five state-run Chinese media entities earlier this month, citing “harsh surveillance, harassment and intimidation of American and other foreign journalists working in China.”

“The individuals that we identified a few weeks back were not media that were acting here freely,” Pompeo said. “They were part of Chinese propaganda outlets. We’ve identified these as foreign missions under American law. These aren’t apples to apples, and I regret China’s decision today to further foreclose the world’s ability to conduct free press operations.”

This media escalation between the U.S. and China comes amid a worldwide narrative battle between several world powers trying to assign blame for the coronavirus “bioweapon” spread.

China, Russia, and Iran are all openly claiming that the coronavirus is a bioweapon attack by the U.S., even though the data and reporting of COVID-19 shows the virus began in Wuhan, China.

China’s Foreign Ministry spokesman Zhao Lijian even claimed that the coronavirus was brought to China by the U.S. military during the 7th Military World Games in Wuhan City in October 2019.

2/2 CDC was caught on the spot. When did patient zero begin in US? How many people are infected? What are the names of the hospitals? It might be US army who brought the epidemic to Wuhan. Be transparent! Make public your data! US owe us an explanation! pic.twitter.com/vYNZRFPWo3

President Trump blasted that baseless assertion Tuesday while defending his decision to now call it the “Chinese virus.”

“China was putting out information, which was false, that our military gave this to them,” Trump said. “Rather than have an argument, I said I have to call it where it came from, and it did come from China. So I think it’s a very accurate term.”

Alex Jones breaks down Tucker Carlson’s latest report exposing American’s dependency on China for pharmaceuticals, and their threat to cut off the supply chain for those who need medications.