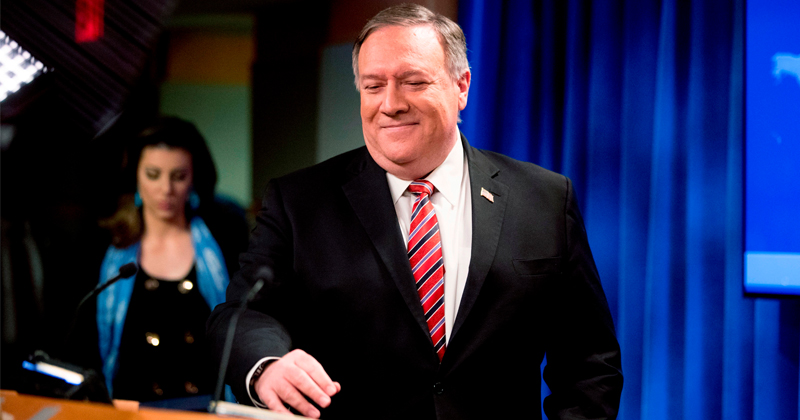 Secretary of State Mike Pompeo must be over the target, as he’s been taking massive amounts of flack from Chinese state media after he said there was “enormous evidence” that the COVID-19 pandemic started in a Wuhan laboratory where scientists were experimenting with coronavirus.

In a series of commentaries, media mouthpieces for the Chinese Communist Party have called Pompeo “evil” and a liar. Xinhua News Agency said he’s spouting “nonsense” – while one newscaster from China Central Television accused him of “spitting poison,” according to Bloomberg.

“U.S. Secretary of State Pompeo picked up his own lies in a May 3 interview with the media,” said newscaster Li Zimeng. “If the cheating behaviors from evil politicians like Pompeo continue, the U.S.’s ‘Make America Great Again’ could become merely a joke.”

“While the coverage included some of China’s harshest critiques of a Trump administration official since the height of the trade war last year, state media continued to steer clear of direct attacks on Trump. The same strategy allowed Chinese President Xi Jinping to satisfy nationalistic outrage at home throughout the trade war, without prompting the U.S. president to counterpunch.

Chinese officials have instead focused their response on their biggest critics within the Trump administration, including Pompeo and White House trade adviser Peter Navarro. Such China hawks have shown a willingness to engage, with Deputy National Security Adviser Matt Pottinger delivering a speech in Mandarin on Monday that praised Chinese doctors who were reprimanded for sounding early warnings about the virus.” –Bloomberg

And while China  – which destroyed evidence in the early stages of the outbreak – has been largely avoiding direct criticism of Trump, it’s becoming more difficult amid repeated attacks from the US president, who has repeatedly accused Beijing of deliberately fumbling the ball, while promising a “conclusive” report on the origins of the virus.

“My opinion is they made a mistake. They tried to cover it. They tried to put it out, just like a fire,” Trump said during a Sunday appearance on Fox News.

Bloomberg, meanwhile, goes so far as to write “Although the Wuhan Institute of Virology was studying bat-borne coronaviruses like the one that causes Covid-19 at the time of the first known outbreak nearby, there has so far been no evidence showing it possessed the previously unknown strain,” citing WIV director Yuan Zhiming, who said last month that “there is absolutely no way that the virus originated from our institute.”

Of note, WIV researchers Peng Zhou and Shi Zhengli have been conducting experiments on bat coronavirus for years – with Zhengli co-authoring a 2015 paper describing how they created a chimeric virus made up of a surface protein of the SHC014 coronavirus strain and the backbone of a SARS virus which had been adapted to grow in mice and mimic human disease. The chimaera infected human airway cells — proving that the surface protein of SHC014 has the necessary structure to bind to a key receptor on the cells and to infect them.

Indeed, Zhengli has been studying how bat coronavirus can infect humans for years.

The official US position, however, is that the COVID-19 is of natural – non-engineered origin, and likely escaped from the Wuhan Institute of Virology – located across town from the Wuhan wet market where the first cluster of cases was recorded.