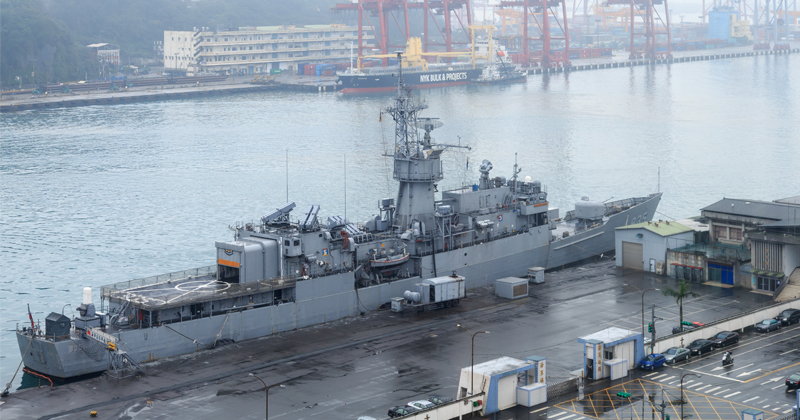 Taiwan staged its own military drills this week, following a set of exercises by the Chinese People’s Liberation Army around the autonomous island.

On Monday and Tuesday, Taiwan’s self-defense force launched 117 medium- and long-range missiles from its Jiupeng military base into waters east of the island, according to Taiwanese Defense Ministry spokesperson Lee Chao-ming. The island’s air force also simulated defending against a naval assault from the southeast by sending two F-16 fighter jets armed with AGM-84 Harpoon anti-ship missiles.

“Taiwan is focusing on boosting self-defense, and building up a comprehensive air and sea defense network to counter military threats from the mainland,” Song Zhongping, a military commentator based in Hong Kong, told the South China Morning Post. “The test-firing of missiles is to boost the island’s self-defense capability. The military drill of the PLA has triggered a lot of concerns in Taiwan, and Taiwan is responding to it also through a strong military means.”

Last week, Beijing launched a pair of large military drills east of Fujian and Zhejiang provinces, the country’s two closest to Taiwan, involving at least half a dozen of the navy’s most advanced warships. While no official report has come down about the craft involved, Japanese media reported at least six ships of different types spotted in the East China Sea or transiting the Miyako Strait, including the Type 052D destroyer Xining, Type 054A missile frigate Daging, the guided-missile frigate Rizhao and the ocean comprehensive supply ship Hulun Lake.

China is bragging about taking Taiwan by force. This is a major development on the world stage. However, the Mainstream Media is so controlled by foreign and Chinese influence that coverage of this major event is barely being documented. Only a handful of alternative media sites have the wherewithal to address the impending danger facing the globe.

Song told the Post that Beijing’s main goal in the drills was “to practice how to effectively maintain control of the sea and the air amid growing foreign interference in Taiwan affairs … and serve as a warning to foreign forces that the PLA has the resolve to [achieve reunification] with Taiwan.”

SCMP noted this was the first time since the 1995-96 Taiwan Strait Crisis that the PLA had held two simultaneous, large-scale, live-fire exercises. During that event, Beijing staged two sets of massive drills in protest of then-Taiwanese leader Lee Teng-hui’s visit to the United States and ahead of the 1996 presidential election on the island; in response, the US dispatched three aircraft carriers to the region, and the PLA was forced to back down.

The latest drills also come amid rising tensions in the region: Taipei recently secured a $2.2 billion purchase of US military hardware that included Stinger anti-air missiles and M1A2 Abrams main battle tanks. Another proposed deal, to sell Taiwan 66 F-16V ”Viper” fighter aircraft for roughly $8 billion, hangs in the balance, and Taiwanese media has accused Washington officials of dragging their feet on the agreement, the New York Times reported Tuesday.

Then, as now, Beijing fears that a nationalist government in Taipei might seek to break away from China entirely and declare independence.

When the communist Chinese Red Army emerged victorious from the Chinese Civil War in 1949 and founded the People’s Republic of China, the republican government that had controlled the country since 1912 was confined to the island of Taiwan, which the Red Army couldn’t invade. Since then, both governments have claimed to be the sole legal representative of the Chinese people, adhering to a One China Policy and compelling international partners to do the same.

While the US switched its recognition of the Chinese government from Taipei to Beijing in 1979, it has retained informal ties with the autonomous island, providing it with arms – typically outdated ones – and rallying to its defense when it is threatened.

One such action is referred to by Washington as a “freedom of navigation operation,” or FONOP, and involves sailing US Navy warships through contested waters to assert its lack of recognition for a country’s claim to those waters. On Friday, the Ticonderoga-class guided missile cruiser USS Antietam transited the 112-mile-wide Taiwan Strait as part of a FONOP, accompanied by a P-8 Poseidon aircraft. Taiwanese media reported that numerous PLA aircraft challenged the Antietam during the nine-hour trip, and that it was observed closely by one of Beijing’s newest and most advanced spy drones.