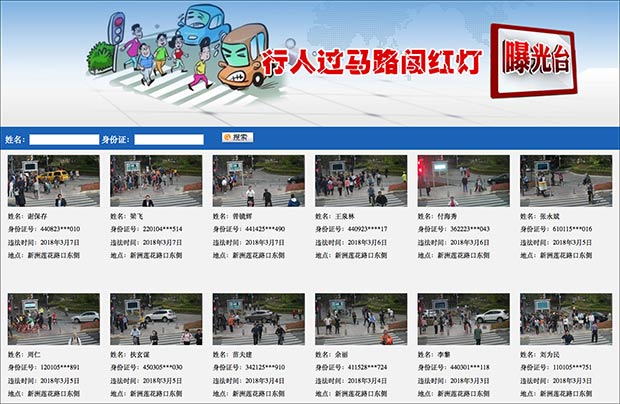 Police in the south of China will soon use facial recognition technology to identify jaywalkers and send them fines over text message.

The messaging aspect is meant to compliment the recent installation at intersections of Intellifusion’s LED screens – designed to shame offenders by displaying their faces.

“For the current system installed in Shenzhen, Intellifusion installed cameras with 7 million pixels of resolution to capture photos of pedestrians crossing the road against traffic lights,” Tao writes. “Facial recognition technology identifies the individual from a database and displays a photo of the jaywalking offence, the family name of the offender and part of their government identification number on large LED screens above the pavement.”

Wang Jun, Intellifusion’s director of marketing solutions, says the system relies on both “technology and psychology” to limit the instances of traffic violations.

“Jaywalking has always been an issue in China and can hardly be resolved just by imposing fines or taking photos of the offenders. But a combination of technology and psychology… can greatly reduce instances of jaywalking and will prevent repeat offenses,” Wang said.

Images of jaywalkers are also being displayed on a government website launched earlier this month.

Wang also notes that pedestrians with numerous traffic violations can have their social credit scores negatively affected, which may reduce their ability to take out loans from Chinese banks.

China currently has more than 170 million CCTV cameras with an estimated 400 million more to come in the next three years.