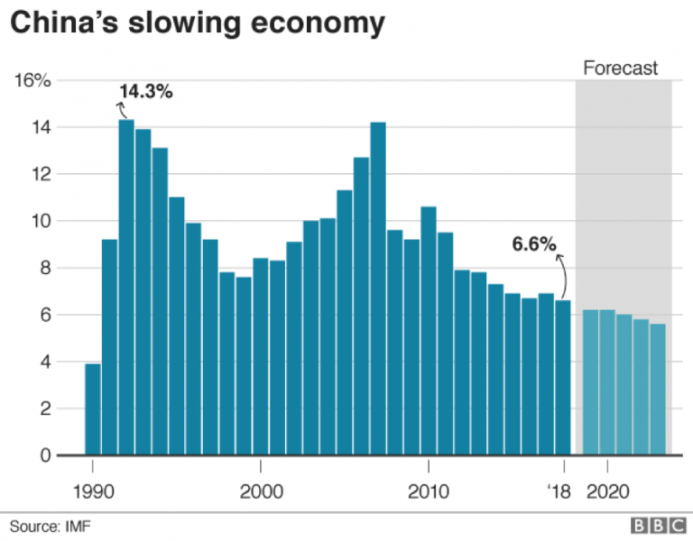 The latest numbers released by China’s statistics bureau fueled widespread concerns about the outlook of the global economy, as the Asian superpower reported its slowest growth rate since 1990.

The figures showed a 6.6% growth for 2018, confirming the view that the growth engine of the world economy is running out of steam.
Deep-Seated Vulnerabilities, Far Beyond the Trade War

China’s weakening growth has been widely attributed to the country’s trade frictions with the United States. To some extent this accurate, as the dispute has burdened both countries with billions of dollars from tariffs and retaliatory counter-tariffs. The 3-month ceasefire that was agreed during the last G20 conference in Buenos Aires is set to end in March and if an agreement is not reached by then, hostilities are bound to resume. Donald Trump has threatened a 25% tariff on $200 billion in Chinese imports, a step that will pile on considerable pressure to the already vulnerable Chinese economy and darken its prospects.

However, the trade war is only one among many problems that the country is struggling with. Even if a trade deal is finally struck with the US, relief will most likely only be temporary. The reasons behind the growth slowdown run much deeper and paint a truly worrying picture of the future. And while the cracks are just beginning to show now, their origins actually lie all the way back in 2008.

In the aftermath of the financial crisis, China appeared to be one of the precious few to make it out unscathed. While its Western peers plunged into chaos and despair, its own economy continued to hum along, almost as if nothing had really changed. However, this escape came at an extremely high cost. China has amassed an unprecedented amount of debt. Already by mid-2018, total debt-to-GDP had exploded to over 250%, a dramatic surge from 140% only a decade earlier. Today, according to Goldman Sachs numbers, it stands at over 300%, making the government’s efforts to engineer a “soft landing” look like wishful thinking.

As the Chinese government tried to deleverage and to rein in some of its past excesses, the extent of the damage began to come to light. The country is riddled with loss-making factories, with excess production capacity, insolvent “zombie” companies, all parts of a wasteful economy created by debt, corruption and extreme centralization of power in the hands of the Chinese Communist Party. After years of corporate spending sprees and acquisitions with borrowed money, in 2018, the rate of corporate debt defaults set new records.

Its banking sector is crippled as well, with nonperforming loans reaching their highest level in a decade at the end of last year. As official figures out of China are largely unreliable, independent analysis and estimates conducted by Autonomous Research put the actual losses Chinese banks are set to suffer through bad loans at $8.5 trillion. That’s 24% of total credit, bringing the estimated loans on which debtors have failed to keep up with scheduled installments or interest payments five times higher than the official projections.

Capital outflows also present a serious challenge. Despite the country’s strict measures and extensive efforts to prevent it, capital flight is rampant. Chinese investors have been accused of driving up real estate prices in many western capitals, a notion not entirely unfounded, as in 2018 they remained the top foreign residential real estate buyers in the US for six years in a row, according to the National Association of Realtors.

Finally, China’s long-term outlook appears equally grim. Demographic trends place a heavy burden on the country and its ability to sustain economic growth. Despite the government’s efforts in recent years to encourage its citizens to have more children, the latest figures show its birth rate hitting lows unseen since 1949, as the number of babies born in China in 2018 dropped by 2 million. Although the country finally relaxed its one-child policy in 2016, birth rates failed to pick up, while long-term, severe damage had already been inflicted to its social and economic development. Apart from the blatant repression and human rights violations that defined the policy which is estimated to have prevented about 400 million births, it also resulted in a diminished workforce, gender imbalances and the acceleration of its aging population. According to a study by the China Academy of Social Sciences (CASS), the country’s population, now at 1.4 billion, is projected to reach a peak of 1.44 billion by 2029. After that, it is expected to enter an extended period of “unstoppable” decline, with the workforce population dropping by as much as 200 million by 2050, while the proportion of retirees is set to steadily increase until 2060.

The Chinese economy accounts for almost a third of global growth, while the country is the world’s largest trader, driving global commerce. That means an economic slowdown is not just China’s problem. To the contrary, it very much affects many countries that face varying degrees of exposure to the Asian superpower, as well as the global growth prospects at large. In late January, the IMF cut its estimate for global growth this year to 3.5%, a noticeable drop from the 3.7% rate recorded in 2018 and a reversal of the growth rate increases of the previous years. This pessimism is far from exclusive to the IMF. Forecasts by the World Bank and the OECD have also been recently downgraded. Among the common reasons for the projected growth slowdown given by analysts is the concern surrounding China. As Citigroup warned in a mid-January note, a slump in China can “blow the global economy off course.”

A slowdown would be particularly painful for Asia and many emerging markets, as for the better part of the last decade, they have grown dependent on China and its robust demand for commodities and materials. However, it’s not only Asia that will feel the impact of shrinking demand. Germany, the US and Australia are also heavily exposed to this risk. This is especially worrying in the case of Germany. As outlined in a recent article, Germany plays a decisive role in the economic future, or lack thereof, of the Eurozone. As it is already weakened and facing strong headwinds of its own, additional pressures from China could not have come at a worse time.

Far from it being a problem for the distant future, the impact of China’s economic woes is already being felt by companies internationally. Car sales in the country have dropped to a 7-year low, impacting automakers like Volkswagen and Toyota, while a significant decline in iPhone sales delivered a severe blow to Apple’s stock price.

Overall, the problems faced by China were largely predictable. A nation buried under such mountains of debt would eventually have to confront the elephant in the room. Growth based on and fueled by credit is only an illusion and cannot be sustained. As reality comes knocking, China’s gloomy outlook should serve as a warning to investors in the West, where governments also attempted to use the very same methods to prop up their economies.

At this point, the damage is irreversible and the imminent global economic slowdown will expose the deep cracks in our system. For investors, as the storm begins to set in, the time is now to take proactive steps and to protect one’s wealth through a solid precious metals portfolio.

Finally, the fact that China has dramatically accelerated its gold purchases during the past decades and added vast amounts to its reserves is particularly telling. Although the People’s Bank of China (PBoC) still only ranks at the fifth place of the world’s top gold-hoarding nations, with approximately 1,900 tons of physical gold, the estimates of total gold holdings among individuals, corporations and gold miners in China are closer to 20,000 tons. This only goes to show that the people have long understood that if you want to be independent and sovereign, you need to secure your wealth and your savings in a real asset which can’t be created out of thin air, spontaneously devalued and manipulated.

The Democratic party has lurched further left than ever before in American history, leading to a civil war within the leadership.