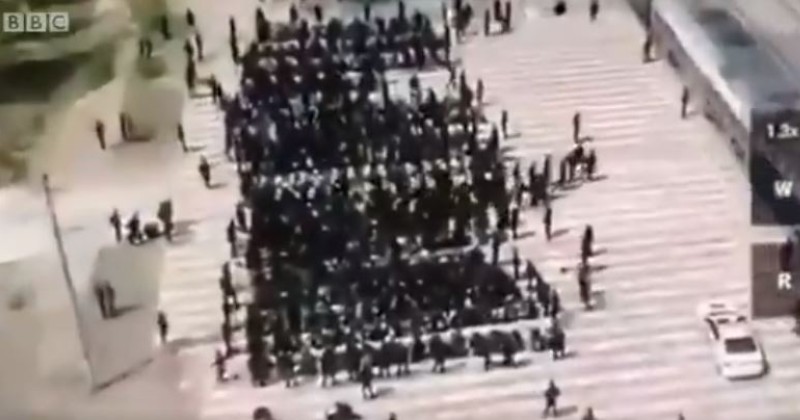 During a Sunday morning BBC news program, China’s ambassador to the UK Liu Xiaoming was in a rare segment asked point blank about viral footage which purports to show a terrifying scene from Xinjiang province of Muslim minority Uighurs being handcuffed and loaded onto train cars.

While the footage, which appears to have been secretly caught via drone, appears to be a year old or more, it resurfaced in recent weeks, gaining millions of views and reigniting allegations of Uighur people being mass shipped to communist ‘reeducation’ camps and sprawling detention centers.

During the tenses Andrew Marr Show segment, Liu described Xinjiang simply as “the most beautiful place.”

Showing the shocking footage which many observers said echoes Jews being mass loaded onto cattle cars during the Holocaust to be taken to their deaths, Marr pressed the Chinese ambassador with:

“Can I ask you why people are kneeling, blindfolded and shaven, and being led to trains in modern China? What is going on there?”

Drone footage out of #Xinjiang showing hundreds of handcuffed #Uyghurs being led on a train headed to who-knows-where.#Beijing's treatment of #China's Uyghur minority is straight out of the #Communist playbook.pic.twitter.com/WzOjT8ldzs

Marr then said Western intelligence agencies and Australian experts have backed or ‘verified’ the clip, though this remains uncertain, to which the ambassador said tersely:

He added: “They say ’one million Uighur has been persecuted, do you know how many population Xinjiang has? Forty years ago it was four or five million, now it is 11m people.”

And addressing widespread, persistent accusations of ongoing ethno-religious cleansing of Chinese Muslims in the provice, Liu said: “People say we have ethnic cleansing, but the population has doubled in forty years.”

Marr promptly rebutted: “According to your own local government statistics, the population growth in Uighur jurisdictions in that area has fallen by 84% between 2015 and 2018.” Liu responded: “That’s not right. I gave you the official figure as a Chinese ambassador. This is a very authoritative figure.

The two also sparred over sanctions. “If the UK goes that far to impose sanctions on any individuals in China, China will certainly make a resolute response to it,” the Chinese ambassador said. “You have seen what happened between China (and) the United States. They sanctioned Chinese officials, we sanctioned their senators, their officials. I do not want to see this tit-for-tat between China-US happen in China-UK relations,” he added.

And then this biting line:

“I think the UK should have its own independent foreign policy rather than dance to the tune of the Americans like what happened to Huawei.”

The degree to which this video is or can be verified by US intelligence will be interesting. It could be invoked when potential further human rights related sanctions are rolled out, given the escalating tit-for-tat between Beijing and the Trump administration.