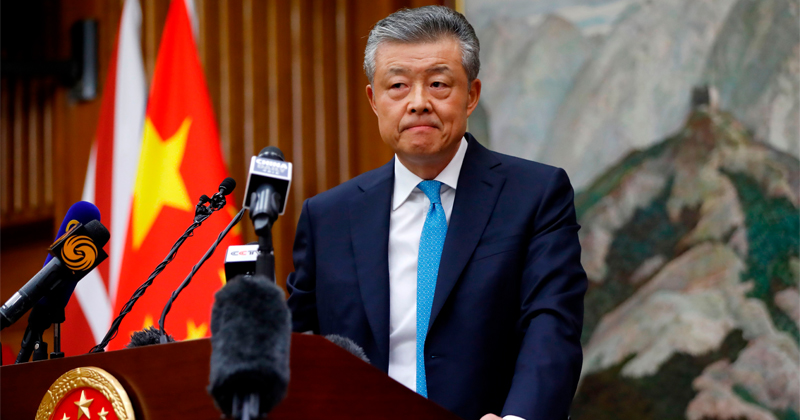 Britain had previously taken aim at the recently passed national security law for Hong Kong. The Chinese envoy to the UK retorted that “the UK has no sovereignty, jurisdiction or right of supervision over Hong Kong.”

Liu Xiaoming, the Chinese ambassador to the UK, has warned Britain against “making China a hostile country”, saying otherwise it will have to “bear consequences.”

Liu referred to Hong Kong as a territory that is “no longer under colonial rule” but that is part of China, expressing hope that the UK won’t interfere in the Asian country’s internal affairs.

He contended that the country would in no way “brook any external interference”, and that no one should underestimate China’s determination to safeguard its sovereignty.

The UK has opposed the adoption of the new Hong Kong Security Law, with Prime Minister Boris Johnson denouncing the legislation for breaching the Sino-British Joint Declaration. The ambassador tweeted in response in early July that “the UK has no sovereignty, jurisdiction or right of “supervision” over Hong Kong whatsoever”, and stressed that Hong Kong issues are China’s internal affair alone and no business of the outside world.

In response, the United Kingdom moved to offer UK citizenship rights to nearly 3 million British Nationals Overseas (BNO) in Hong Kong and their immediate families, providing them opportunities to live in the UK for five years and then apply for settled status and citizenship. The move prompted criticism from Beijing, which blasted the UK for its attempt to get involved in the internal affairs of a sovereign country. Foreign ministry spokesman Zhao Lijian said that China “reserves the right to take corresponding countermeasures”.

The national security law for Hong Kong was unanimously passed on 30 June by the top Chinese legislative body, the standing committee of the National People’s Congress (NPC), and later signed by President Xi Jinping. The law aimed at boosting security and safety is seen by some Hong Kong residents as a violation of their liberties as it bans secessionist, subversive, and terrorist activities, as well as any form of foreign interference in Hong Kong.

Johnson has now reportedly been offered a set of plausible reasons to back out of his previous decision to allow Chinese telecoms giant Huawei to play a limited – up to 35 percent – role in the rollout of the UK’s 5G infrastructure and more specifically, supply some “non-core” components to this end.

The UK has reportedly been weighing the prospect of backtracking on its decision earlier this year to give Huawei access to the UK domestic telecoms market. Liu suggested it’s up to the UK if it opts to pay a “higher price for lower quality” and asserted that an agreement on Huawei “is a win-win example of UK-China collaboration.” Whitehall has since been pressed by its western allies, primarily the US, to reconsider, with Washington citing “security backdoors” in Huawei equipment that could allegedly be used by Beijing – claims the Chinese side has vehemently denied.