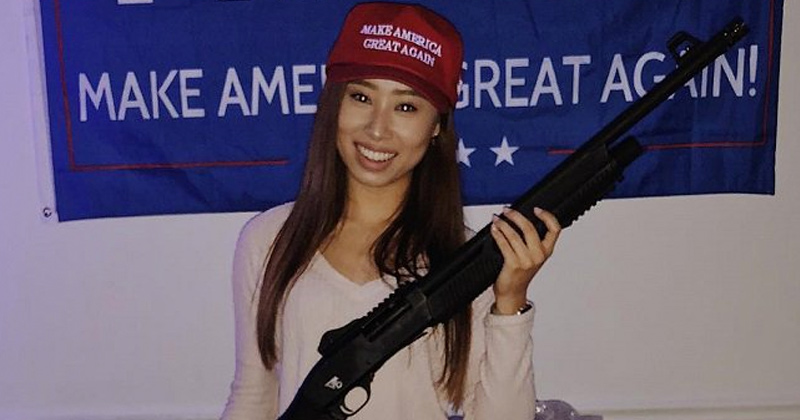 The woman chosen as Miss Michigan World America was stripped of her title Thursday after butting heads with the organization over her conservative-leaning political views.

Kathy Zhu says she was booted from the Miss World America pageant “due to my refusal to try on a hijab in 2018, my tweet about black on black gun violence, and ‘insensitive’ statistical tweets.”

Miss World America's State/National/Chief Director accused me of being racist, Islamaphobic, and insensitive.

They stripped me of my Miss Michigan title due to my refusal to try on a hijab in 2018, my tweet about black on black gun violence, and "insensitive" statistical tweets. pic.twitter.com/K1Btho0Pgq

“Miss World America’s State/National/Chief Director accused me of being racist, Islamaphobic, and insensitive,” Zhu wrote on Twitter, posting the director’s email to her, along with her own response which calls out Sharia Law.

In one of the supposedly offensive tweets, Zhu, who campaigned with Chinese-Americans for Trump in 2016, mentioned a statistic about the black murder rate.

“Did you know the majority of black deaths are cause by other blacks?” Zhu wrote. “Fix first before blaming others.”

Did you know the majority of black deaths are caused by other blacks? Fix problems within your own community first before blaming others https://t.co/9r3KArvQkQ

Zhu also released text messages detailing the circumstances that led to her returning her crown and sash.

These are the text message exchanges between the state director and me. pic.twitter.com/HtHS1gns6X

“Do you know what is ‘insensitive’?” she asked the pageants’ directors. “What’s ‘insensitive’ is that women in the middle east are getting STONED TO DEATH for refusing to obey they husband’s order to wear hijabs.”

“A muslim woman tried to FORCIBLY put a hijab on my head without my permission. I tweeted about it on my social media, and it got the attention of the media. Almost everyone was supportive of me refusing to be put in that situation.”

“Are the people of [Miss World America] implying that they advocate for the punishment of women who refuse to wear a hijab?” she wrote.

On Friday, Zhu posted a video thanking her supporters after her story went viral on social media.

I was born in china. First generation immigrant. Open up your eyes to the real world. pic.twitter.com/lYR99DXPe0