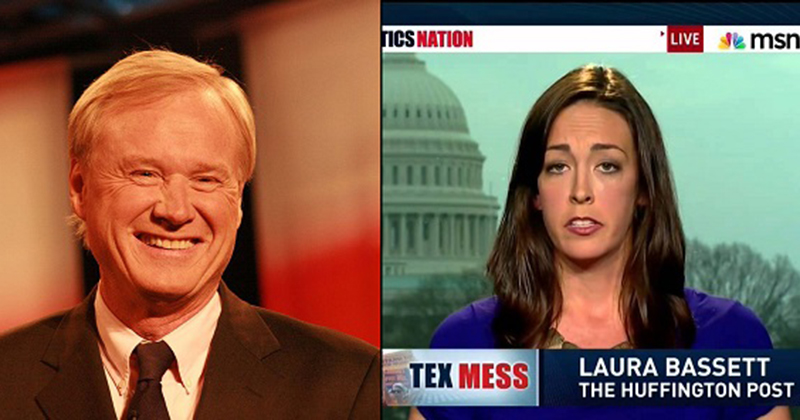 His crime against wokeness appears to be allegations he “inappropriately flirted” with a female guest (see: paid her a compliment to be nice).

In 2017, I wrote about a cable news host being gross and inappropriate with me. I was afraid to name him at the time. I'm not anymore; it was Chris Matthews! And his sexist exchange with Warren this week inspired me to revisit those moments and name him https://t.co/oBWXXJDPhR

Here’s exclusive video of the incident:

Owen Shroyer and Harrison Smith joint The Alex Jones Show in-studio to break down getting thrown out of CPAC, and Alex challenges Gorka to a charity boxing fight.

Laura Bassett claimed Matthews said to her, “Why haven’t I fallen in love with you yet?” and exclaimed, “Keep putting makeup on her, I’ll fall in love with her.”

“Let me start with my headline tonight,” Matthews said. “I’m retiring. This is the last Hardball on MSNBC.”

“After conversations with MSNBC I decided tonight would be my last Hardball, so let me tell you why,” Matthews said. “The younger generations out there are ready to take the reins. You see them in politics, in the media, in fighting for the causes.”

“A lot of them have to do with how we talk to each other,” he continued. “Compliments on a woman’s appearance that some men, included me, might have once incorrectly thought were okay, were never okay. Not then and certainly not today, and for making such comments in the past, I’m sorry.”

After a commercial break Matthews had left the Hardball set, with a stunned Steve Kornacki hosting the show in his stead.

Matthews will now disappear from the network entirely, never to be mentioned again. His entire career will be treated as though it never happened and on the off chance his name is mentioned he will only faintly be remembered as a creepy sex pervert and an anachronism.

If you doubt this will be the case, just look at what’s happened with Charlie Rose.