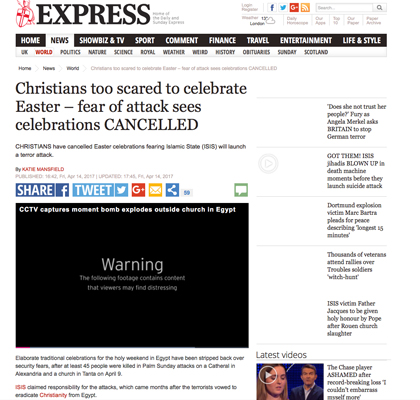 Traditional Easter celebrations have been cancelled in Egypt over security fears after ISIS killed over 45 people with suicide bombs in two churches on Palm Sunday.

The attacks came months after ISIS vowed to eradicate Christianity from Egypt, which comprises about 10% of the population. 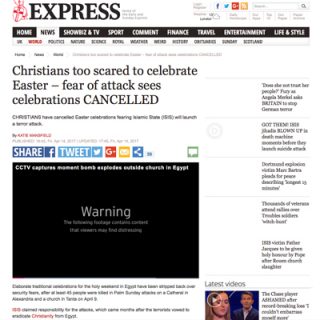 “Christians in Egypt are concerned about their safety during this holy week. Safety is not guaranteed in spite of all the extra security measurements, people are worried someone could sneak into a church and leave a bomb,” an Egyptian Christian, who wished not to be identified, told Express. “However, I was in Church last night and we had lots of extra security placed there by the security department in our neighborhood.”

“It is too early to tell what the outcome of the state of emergency will be but it will give the government free hand to take extra measures such as instantly capturing of suspects and trying to stop suspects before they commit attacks.”

“We do have strong concerns especially Saturday evening when the main Easter service starts and ends at midnight. It is one of the most heavily attended services of the year,” he added.

Egyptian president Abdel Fatah el-Sisi declared a three-month state of emergency following the Palm Sunday attacks, deploying the military across the country and restricting freedom of movement in an effort to protect Christians and “vital and important infrastructure,” and halt further ISIS attacks.

“I ask Egyptians to bear the pain,” el-Sisi said, warning that the war against the jihadists would be “long and painful.”

The anonymous Christian pointed out that “much of the population is either illiterate or very poorly educated,” which are ideal conditions for ISIS to recruit new jihadis.

Some Christians are set to defy the intimidation and attend more subdued and limited Easter services with armed guards and “without any festive manifestations.”