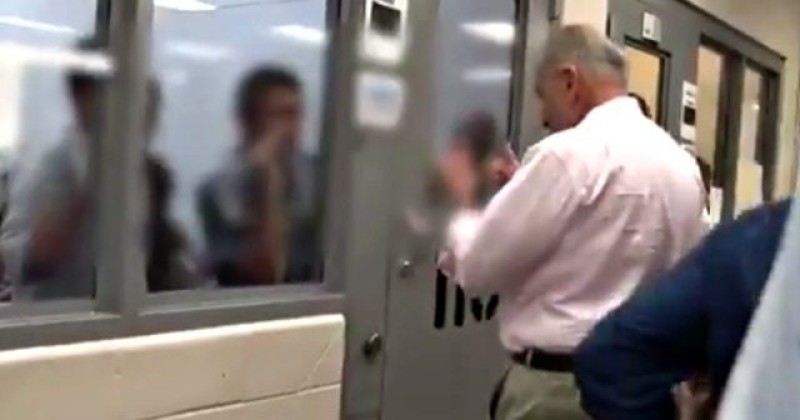 Democrat leader Sen. Chuck Schumer was caught on camera giving a ‘thumbs up’ to illegal immigrants during a visit to a holding center in McAllen, Texas.

Schumer wants the migrants to be released to Catholic Charities and other non-profit welcoming groups as part of the Democrats’ plan for universal catch and release.

“Many of the migrants at the center welcomed by Sen. Schumer are being trafficked by the cartels, which expect to profit once the migrants repay their smuggling debts with wages from U.S. jobs,” reports Breitbart. “The migrants get the jobs by being released from detention, and then accepting work with longer hours and lower wages than the hours and wages sought by the young Americans whom Schumer is expected to represent and champion.”

The @SenateDems and I pushed Border Patrol leadership hard.

Overcrowding. Migrants without the help they need.

It doesn’t have to be this way. These are decisions from the top of the Trump admin.

We must pass our bill to help end it—the Stop Cruelty to Migrant Children Act. pic.twitter.com/EP4cpKknd9

Despite Schumer claiming in a statement, “These are families fleeing violence, searching for a better life in America,” the people he gave a ‘thumbs up’ to were all young men.

You can’t really blame Schumer for being welcoming illegal immigrants into America with a ‘thumbs up’.

After all, they will be contributing to the millions of unlawful votes the next Democratic presidential candidate will receive in 2020.