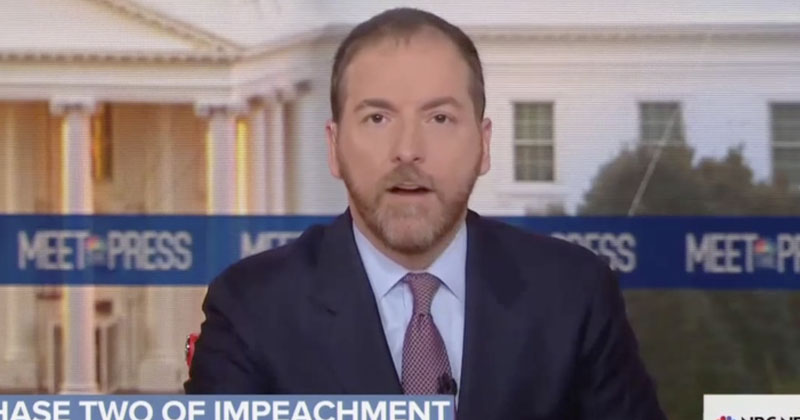 MSNBC host Chuck Todd tried to explain away the sinking impeachment poll numbers, claiming the disapproval was not “organic” and that Republicans were “bullying” Democrats by asking questions about their unfair process.

On “Sunday Today,” host Willie Geist bemoaned the public’s growing dissent on impeachment, pointing out that the polls indicated the Democrats’ efforts were not moving the needle on their desired narrative.

“Even in those two weeks of public testimony that looked dramatic to a lot of people, but the public didn’t seem particularly moved by that. That’s got to please the President,” Geist said.

“Well, look, and it was — it didn’t happen organically you know,” Todd bitterly declared without evidence.

“We’re going to report this this morning, but we’ve tallied up the amount of paid media on pro and anti-impeachment. There’s been basically a 4-to-1 spread of impeachment messaging on the President’s favor over the last essentially two months since this inquiry began.”

“So yes, I think the President’s pleased,” Todd continued. “But, like I said, it didn’t happen organically. This was asymmetrical warfare and the Democrats didn’t pick up a weapon,” ignoring the irony that the Democrats are using impeachment as a political weapon against Trump.

Todd went on to blame Republicans for their insistence on a fair process and their effective cross examination of the “witnesses” brought forward by House Intelligence Committee Chairman Adam Schiff (D-Calif.).

“All of it, I think, intended to see if they could bully enough House Democrats to sort of hesitate on pulling the trigger on impeachment and declare political victory.”

“This seems to be what the strategy is now, we’ll see how it plays out over the next couple of weeks. But Republicans are going to continue to look for reasons to describe the process as unfair,” he added.