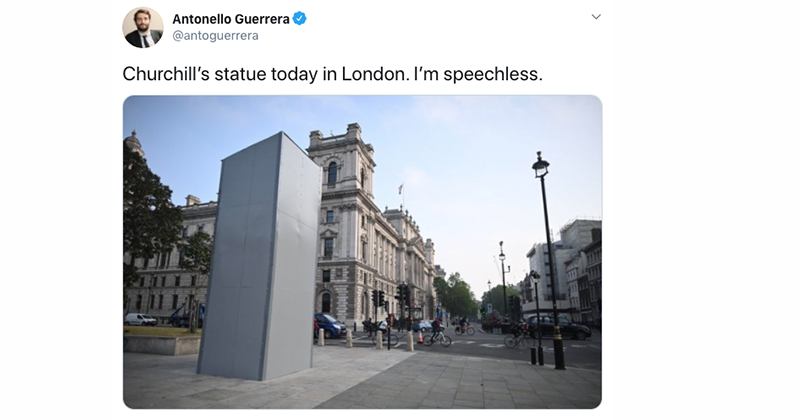 The statue of Winston Churchill, as well as the Cenotaph war memorial in Central London have been boarded up ‘for their own protection’, even though Black Lives Matter have canceled demonstrations scheduled for this weekend.

London Mayor Sadiq Khan ordered the boarding up of the monuments, along with a host of others throughout the city, claiming that it is ‘to make sure they are protected’. Khan is pushing an ongoing effort to ‘diversify’ the landmarks of London.

Khan also suggested that it is ‘extreme far right groups who advocate hatred and division’ that would cause violence, despite the fact that for the past two weeks the violence against police and vandalism of monuments has been perpetrated solely by BLM agitators.

To anyone planning to join #BlackLivesMatter protests over the coming days: for you and your families safety, please stay at home and find a safe way to make your voice heard.

To the extreme far-right groups hijacking this crucial cause: Londoners have no time for your hatred. pic.twitter.com/JXs3iwNpUc

The boarding went up around the Churchill statue and other monuments last night. Churchill is now completely obscured:

Other statues such as this one of King James II got the same treatment:

A statue of George Washington in Trafalgar Square is now also completely obscured:

Workmen arrived this morning at Guy’s Hospital to board up a statue of founder Thomas Guy:

So sad that rioters can’t be trusted not to attack the cenotaph, so much so that they now feel the need to board it up.

Our soldiers died for our freedom and yet people dance on their graves. pic.twitter.com/PwHqb041nI

Barriers on our bridges, barriers around our monuments. pic.twitter.com/LrlxmyUfNJ

Veterans, football lads, bikers and ordinary decent citizens will also be on hand to keep them safe. pic.twitter.com/u1ihQAUBCp

"A few years ago in a BBC poll of a million people he was voted Britain’s greatest Briton. Now he is being boarded up to protect him from the mob. Something has gone very wrong." https://t.co/83C1WTksHo

Statues of Nelson Mandela and Mahatma Gandhi were also boarded up.

BLM organisers announced last night that Saturday’s events are  being postponed due to ‘many hate groups’ threatening to counter protest.

Another protest purporting to be organised by ‘Anti-fascists support Black Lives Matter’, run by Labour affiliated far-left group Momentum is still going ahead however.

Police warned earlier this week that clashes were set to erupt after multiple football ‘firms’ as well as Tommy Robinson and his followers vowed to be present to protect the monuments.

The move to completely obscure the monuments from view will likely only attract more angry Brits to converge, demanding they be uncovered and properly protected from ‘woke’ vandal mobs.

It’s also reminiscent of efforts in other European countries to ‘protect’ monuments from terrorists by building barriers around them:

"Bulletproof glass barrier along the Eiffel Tower is part of a broader $41 million security project against terrorist attack threats in Paris." pic.twitter.com/vJM4y2MpIW

Eiffel Tower to get anti-terrorist glass barrier built around its base https://t.co/fhyI3w3tK9 pic.twitter.com/LNmu5NQrbC