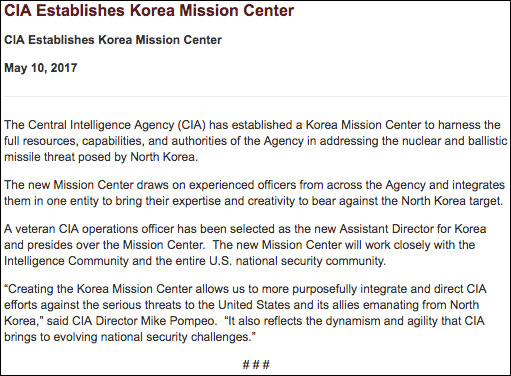 The Central Intelligence Agency announced Wednesday the creation of a new mission center tasked with addressing the threat of North Korea.

Located in CIA headquarters in Langley, Virginia, the unit, according to an agency press release, will focus on “the nuclear and ballistic missile threat posed by North Korea.”

“The Central Intelligence Agency (CIA) has established a Korea Mission Center to harness the full resources, capabilities, and authorities of the Agency in addressing the nuclear and ballistic missile threat posed by North Korea,” the statement says.

“The new Mission Center draws on experienced officers from across the Agency and integrates them in one entity to bring their expertise and creativity to bear against the North Korea target.”

An unnamed veteran CIA operations officer, who recently became Assistant Director for Korea, has been chosen to head up the center.

According to CIA Director Mike Pompeo, the unit will analyze and direct CIA efforts toward the “serious threats” posed by the regime.

“Creating the Korea Mission Center allows us to more purposefully integrate and direct CIA efforts against the serious threats to the United States and its allies emanating from North Korea,” Pompeo said.  “It also reflects the dynamism and agility that CIA brings to evolving national security challenges.”

The mission center surfaces as tensions in the Korean Peninsula escalate over the North’s nuclear weapons program.

The U.S. has responded to the Pyongyang’s continued missile tests by deploying the USS Carl Vinson carrier strike group and a nuclear-powered submarine to Korean waters as well as moving the THAAD missile defense system to South Korea.