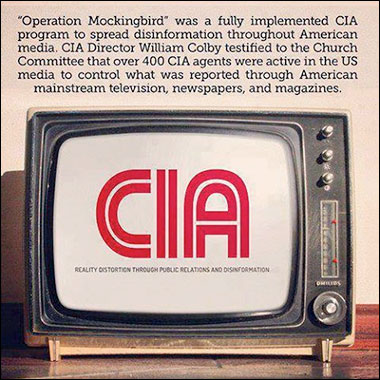 Operation Mockingbird, the CIA’s long term effort to control the news, has shifted into overdrive.

On July 2, a little noticed “reform” passed in January went into effect. The Smith-Mundt Modernization Act of 2012, passed as part of the 2013 National Defense Authorization Act, will allow the CIA to flood America with more government propaganda.

The Smith-Mundt Act, passed as the national security state was taking shape in 1948, authorized the State Department to unleash a tidal wave of propaganda outside the United States while supposedly forbidding its dissemination inside the country. The law set the stage for Frank Wisner, who headed up the CIA’s covert action division in the early 1950s, to build his “mighty Wurlitzer,” described by none other than the New York Times as “the means for orchestrating, in almost any language anywhere in the world, whatever tune the CIA was in the mood to hear.”

In the years since, the establishment media has worked hand in glove with the CIA. This cozy relationship was revealed by Frank Church and the Select Committee to Study Governmental Operations with Respect to Intelligence Activities in 1975 and, a few years later, by reporter Carl Bernstein.

“Among the chief executives who helped the CIA were William Paley of CBS, Henry Luce of Time, Arthur Sulzberger of the New York Times, Barry Bingham Sr. of the Louisville Courier-Journal, and James Copley of the Copley News Service,” write Amy Goodman and David Goodman in Unreality TV, The Mighty Wurlitzer, Hijacking Public Media, a chapter from the book Static: Government Liars, Media Cheerleaders, and the People Who Fight Back. “The leading TV networks, including ABC and NBC, and the wire services-AP, UPI, Reuters, along with Hearst Newspapers, Scripps Howard, Newsweek, the Miami Herald, and the Saturday Evening Post all had dealings with the spy agency. The CIA’s most valuable associations were with the New York Times, CBS, and Time Inc.”

This media penetration by the CIA is not merely a baseless conspiracy theory as some might argue, but is backed up by CIA office memos released under FOIA revealing the placement of “important assets” inside every major news organization in the country. “It was not until 1982 that the Agency openly admitted that reporters on the CIA payroll have acted as case officers to agents in the field,” writes Alex Constantine.

“Most consumers of the corporate media were – and are – unaware of the effect that the salting of public opinion has on their own beliefs,” Constantine continues. “A network anchorman in time of national crisis is an instrument of psychological warfare in the MOCKINGBIRD media. He is a creature from the national security sector’s chamber of horrors. For this reason consumers of the corporate press have reason to examine their basic beliefs about government and life in the parallel universe of these United States.”

Despite the promise of the Smith-Mundt Act – that a firewall stands between foreign and domestic propaganda – the CIA, the bastard child of Wall Street lawyers, has never honored its charter (prohibiting domestic operation) and has consistently utilized the corporate media as a propaganda machine.

Enactment of the Smith-Mundt Modernization Act underscores the fact the CIA no longer pretends to honor its charter and refrains from flooding the media with government propaganda. “The evaporation of Smith-Mundt and other provisions to safeguard U.S. citizens against government propaganda campaigns is part of a larger trend within the diplomatic and military establishment,” ace reporter Michael Hastings wrote in May, 2012, more than a year before his assassination.