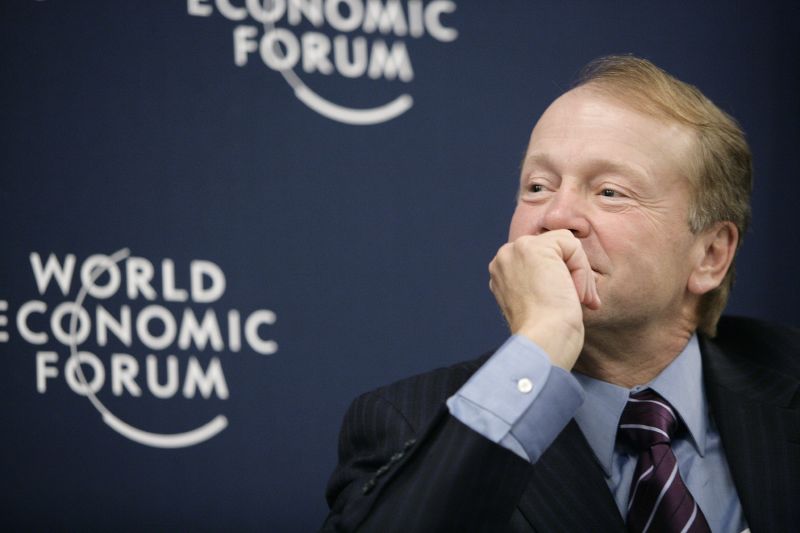 In the letter sent May 15 Chambers implores Obama to curtail NSA surveillance. The letter followed new revelations by Edward Snowden alleging NSA technicians intercept Cisco computers and equipment manufactured by other companies and covertly install surveillance software on the machines.

“A document included in the trove of National Security Agency files released with Glenn Greenwald’s book No Place to Hide details how the agency’s Tailored Access Operations (TAO) unit and other NSA employees intercept servers, routers, and other network gear being shipped to organizations targeted for surveillance and install covert implant firmware onto them before they’re delivered,” writes Sean Gallagher for Ars Technica.

The document cited in Greenwald’s book includes a photograph of NSA employees opening a box intercepted during transit to a targeted customer and installing beacon firmware with a “load station” designed specifically for the task.

“We ship our products globally from inside as well as outside the United States, and if these allegations are true, these actions will undermine confidence in our industry and in the ability of technology companies to deliver products globally,” Chambers writes in the letter to Obama.

“We simply cannot operate this way; our customers trust us to be able to deliver to their doorsteps products that meet the highest standards of integrity and security. We understand the real and significant threats that exist in this world, but we must also respect the industry’s relationship of trust with our customers.”

Unfortunately, Mr. Chambers is making his argument against NSA surveillance based on the government claim of “significant threats that exist in this world.” This feeds right into the propaganda that al-Qaeda and other “bad guy” actors pose a threat so ominous it requires not only widespread violation of the Fourth Amendment but the theft of private property and undermining contractual agreements between companies and individual customers.

Last week, in an excerpt from his book posted at The Guardian, Glenn Greenwald argued a point Infowars has made for years – the government is not particularly interested in surveilling terrorist “bad people,” as they insist, but rather Americans who challenge the government and the establishment status quo.

The perception that invasive surveillance is confined only to a marginalized and deserving group of those “doing wrong” – the bad people – ensures that the majority acquiesces to the abuse of power or even cheers it on. But that view radically misunderstands what goals drive all institutions of authority. “Doing something wrong” in the eyes of such institutions encompasses far more than illegal acts, violent behavior and terrorist plots. It typically extends to meaningful dissent and any genuine challenge. It is the nature of authority to equate dissent with wrongdoing, or at least with a threat.

Greenwald then cites examples of abuse under the FBI’s COINTELPRO: the surveillance of Martin Luther King and the civil rights movement, the subversion of the antiwar movement, and others engaged in “political activity that threatened the prevailing order.”

As we have documented, this effort to subvert and neutralize all meaningful political opposition continued after congressional hearings on FBI wrongdoing in the mid-1970s despite the agency declaring it had abandoned COINTELPRO and the surveillance and subversion of domestic political groups and individuals.

In 2009 Alex Jones received a secret report distributed by the Missouri Information Analysis Center (MIAC) entitled “The Modern Militia Movement.” The MIAC report described supporters of presidential candidates Ron Paul, Chuck Baldwin, and Bob Barr as “militia” influenced terrorists and instructed the Missouri police to be on the lookout for supporters displaying bumper stickers and other paraphernalia associated with the Constitutional, Campaign for Liberty, and Libertarian parties.

The MIAC report coincided with a similar report issued by the Department of Homeland Security. The “Rightwing Extremism: Current Economic and Political Climate Fueling Resurgence in Radicalization and Recruitment” document was produced during the Bush administration and revised during the Obama administration, thus demonstrating a continuity spanning a supposed left-right political divide.

The government has since produced reports and studies characterizing Americans who are “suspicious of centralized federal authority” and “reverent of individual liberty” as domestic terrorists.

The NSA, the Department of Homeland Security, the FBI and other intelligence and law enforcement agencies work together in concerted fashion to nullify political opposition. The effectiveness of this effort was demonstrated in late 2011 when the government took down the Occupy movement.

A document produced by the Partnership for Civil Justice Fund “shows a terrifying network of coordinated DHS, FBI, police, regional fusion center, and private-sector activity so completely merged into one another that the monstrous whole is, in fact, one entity: in some cases, bearing a single name, the Domestic Security Alliance Council,” writes Naomi Wolf. “And it reveals this merged entity to have one centrally planned, locally executed mission. The documents, in short, show the cops and DHS working for and with banks to target, arrest, and politically disable peaceful American citizens.”

While the letter John Chambers sent to Obama is commendable, it reveals a fundamental misunderstanding of the issue. NSA surveillance is not about al-Qaeda and the war on terror as advertised. It is about making sure the political establishment – in the service of banks and the financial class, as Naomi Wolf rightly notes – maintains a stranglehold over government and other institutions. 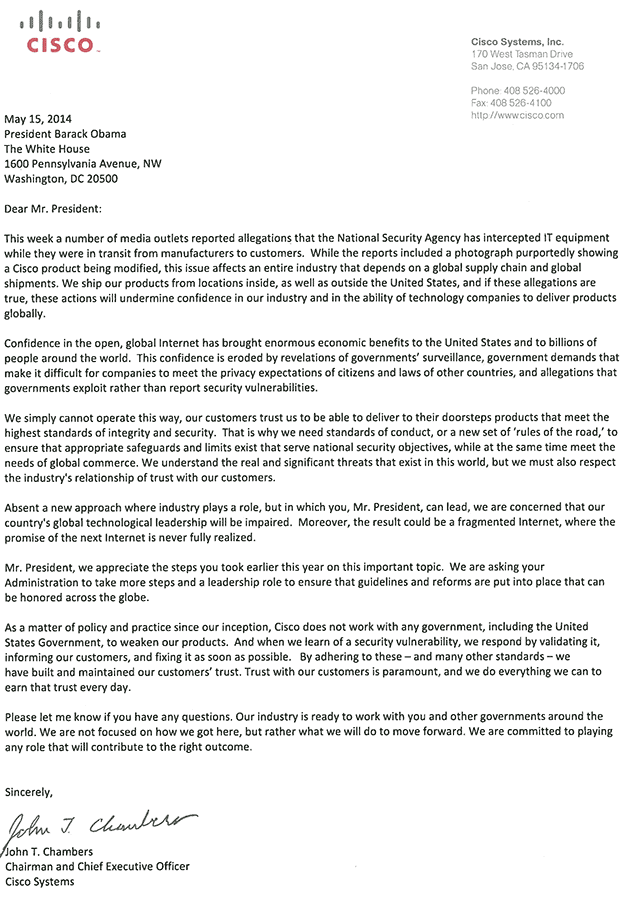