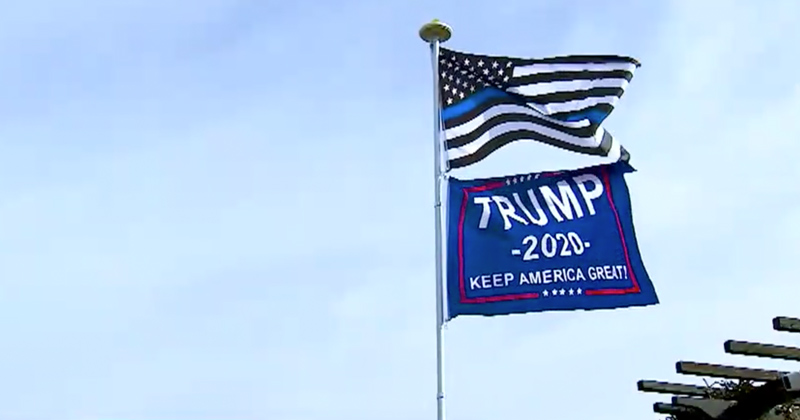 An Arizona woman is proud Donald Trump is her president, but the city she lives in is triggered over a flag she’s flying to show her support.

Tawney Baccelia says the city of Prescott Valley sent her a notice last month informing her the “Trump 2020” flag she has flying at her home, beneath a Blue Lives Matter flag, was against city code.

“It was shocking that someone would try to tell me what I can and can’t fly in my own yard,” Baccelia told Fox 10 Phoenix.

According to Baccelia, code enforcement claimed you can only fly political flags 60 days before a campaign and only 30 days after, but she says her flag isn’t a campaign statement.

“Mine is for: I support my president. I don’t think anyone would have complained if I had [an Arizona] Cardinals flag under that or a military flag or anything like that.”

The ordinance also reportedly dictates no flags can be flown beneath the American flag, however Baccelia claims that mandate doesn’t apply to her either.

The city has threatened her with hundreds of dollars in fines if she doesn’t comply with the mandate.

Fortunately for her, Prescott Valley Mayor Kell Palguta agrees it’s her right to fly whatever flag she chooses.

“She’s demonstrating her First Amendment right, she has every right to and who are we to tell her no,” the mayor told Fox 10.

Palguta says he’s in the process of drafting a bill that will address the city’s outdated laws, which he says haven’t kept up with the growing popularity of novelty flags.

“15 to 20 years ago, novelty flags weren’t very popular. You didn’t see ‘thin blue line flags’ or ‘thin red line flags,’ you just saw an American flag,” the mayor claimed. “As times have changed, the town needs to catch up and we need to change a little bit.”

As for Baccelia, she says her flag will continue to fly until the city makes its next move.

“I’m not taking it down. I believe too many men and women died fighting for our freedom of speech,” she said. “It’s our First Amendment and I’m not going to be taking it down.”