“We were sick of corporate farming, GMOs and pesticides”

A Northwood, Iowa man charged with violating a city ordinance that bans raising chickens within city limits is set to face trial late next week. 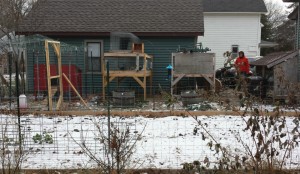 Leo Hendrick, war veteran, father and owner of Spartan Arms, moved his family to Northwood five years ago in hopes to live a more healthy and self-sufficient life. Through hunting, gardening and raising small animals like chickens and rabbits, Hendrick has become almost completely food independent.

“We were sick of corporate farming, GMOs and pesticides,” Hendrick told Storyleak. “The price of groceries just keeps going up too so this is really the only way me and my family can survive.”

Unfortunately for Hendrick, once city council learned of his family’s chickens, a Worth County sheriff’s deputy arrived at his home late August to present a letter demanding he remove all animals from his property within 10 days.

“It really wasn’t a surprise. I don’t blame the sheriff’s department though,” Hendrick said. “There has never been a citizen complaint at all about my chickens or my gardens. It just comes down to the city government complaining about it.”

After receiving the letter, Hendrick immediately requested to speak to the Northwood City Council while submitting a possible amended ordinance to keep the family chickens. With written support from more than a dozen neighbors, Hendrick went before the city council, only to have his request denied. 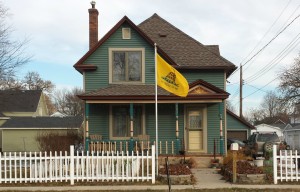 “They actually told me that I just needed to ‘fit into society’ and comply,” Hendrick said. “The mayor even told me that government intruding into lives like this was okay and needed, which I didn’t agree with.”

Only a few days later, Hendrick received a citation in the mail informing him that he was in violation of Northwood City Code Section 55.05, which states, “It is unlawful for a person to keep livestock within the city except by written consent of the council or except in compliance with the city’s zoning regulations.”

Hendrick quickly returned the citation to the city, opting to plead not guilty.

With the trial set for Dec. 13, Hendrick soon learned that the judge had banned him from bringing up any significant point during his trial including the benefits of homegrown food, other cities that allow residents to raise chickens and the fact that few people agree with the ordinance, showing a clear attempt by the city to stop any juror from nullifying the case.

“They had a whole list of things that I couldn’t talk about. I was pretty upset when the judge upheld all of that,” Hendrick said. “I felt that the judge and the prosecutor were both working against me.”

Hendrick will be represented by a court appointed lawyer for the 9 a.m. hearing. If convicted, he could face up to 30 days in jail and a $600 fine.

This article first appeared at StoryLeak.com.