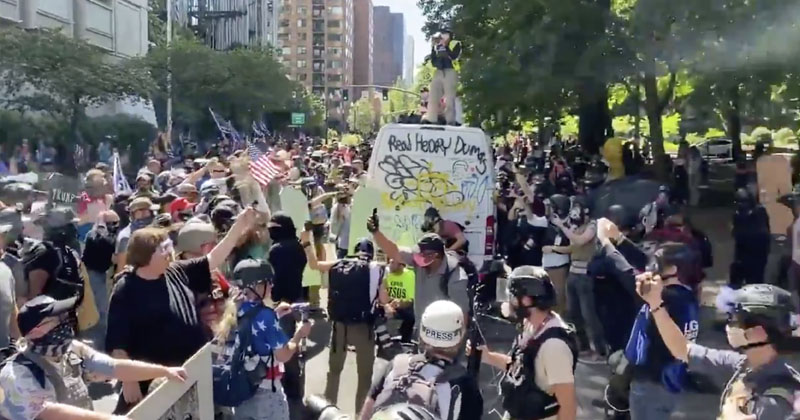 Fights broke out between left-wing and right-wing groups in downtown Portland, Oregon on Saturday as police struggled to contain the violence.

Footage captured by Infowars reporter Savanah Hernandez shows brutal clashes break between hundreds of Antifa and the Proud Boys outside the Multnomah County Justice Center during their dueling rallies.

ANTIFA is losing this battle. pic.twitter.com/ADNAZ0SoVi

Conservative groups had organized a “No To Marxism” rally in the area but Antifa and Black Lives Matter militants reportedly arrived to bring violence and stage an anti-police riot of their own.

Antifa is seen burning the American flag during the melee as Proud Boys armed with crude shields maced any charging leftists.

ANTIFA burns American flag as another fight breaks out pic.twitter.com/2sf4l5gBIQ

Welcome to the ANTIFA side of this protest pic.twitter.com/LDpX6e4skn

Later in the afternoon, Antifa reportedly outnumbered the Proud Boys and pushed them down the street.

ANTIFA have backed a smaller group of proud boys into a parking garage pic.twitter.com/1e26JQxXNi

Portland Police warned through loudspeakers that they would declare the riot a riot if the riot continued.

Announcements being made now by officers that an unlawful assembly or riot will be declared if fighting continues. pic.twitter.com/7i2BuU6t7b

DHS leads some blue lives matter folks out. As they start leaving PPB declared it an unlawful assembly pic.twitter.com/RMijPM8SSm

DHS and Portland Police moved in with pepper balls, pushing the rioters out of the street to a neighboring park.

This marks the 87th consecutive day of Antifa riots and clashes with police following the death of George Floyd in Minneapolis in May.

“Another bad night of Rioting in Portland, Oregon. A small number of Federal troops there to protect courthouse and other Federal property only (great job!). Wanting to be asked by City & State to STOP THE RIOTS. Would bring in National Guard, end problem immediately. ASK!” Trump tweeted Saturday.

Another bad night of Rioting in Portland, Oregon. A small number of Federal troops there to protect courthouse and other Federal property only (great job!). Wanting to be asked by City & State to STOP THE RIOTS. Would bring in National Guard, end problem immediately. ASK!

Action 7 heads to Portland for night 1 of riot coverage. ANTIFA marched through neighborhoods surrounding Irving Park, a place they deemed “the most racist neighborhood in Portland” and ended their night by destroying 3 police cars at the North Police Precinct.