Now that the Iranian economy is reeling and real people are feeling the pain from strangling sanctions imposed by the west, the perpetrators are beginning to blame the victims.  As the currency loses 40% of its value and poor people, large families and the elderly find themselves unable to afford basic provisions, Hillary Clinton has informed the world that sanctions she championed aren’t causing them to go hungry. 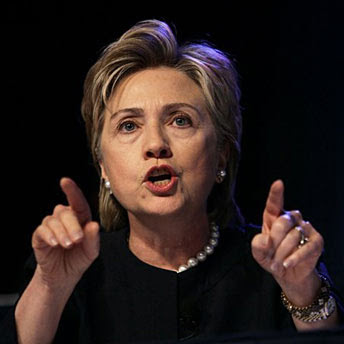 Rather the Iranian regime’s mismanagement of the economy is causing the pain:

Secretary of State Hillary Rodham Clinton made it clear that the United States had no intention of relaxing the sanctions — particularly now, just as they show the first sign of forcing Iran’s leaders to rethink the costs of their nuclear program.

“We have always said that we had a dual-track approach to this, and one track was trying to put pressure on the Iranian government to come to the negotiating table,” Mrs. Clinton told reporters. But she said it was Iran’s own mismanagement of its economy, more than the sanctions, that deserved “responsibility for what is going on inside Iran.”

“And that is who should be held accountable,” Mrs. Clinton said. “And I think that they have made their own government decisions, having nothing to do with the sanctions that have had an impact on the economic conditions inside the country.”

This is a perfect example of a government  official covering her tush by anticipating the storm of protest that will ensue once the poor and vulnerable start dying on the street and crying babies no longer can be fed by their mothers.  That’s when the internal contradictions of the sanctions regime will begin to be seen more clearly.  That is, that the strangulation of Iran will not hurt anyone in the leadership.  It will not hurt the military.  It will not end the nuclear program.  It isn’t even “forcing Iran’s leaders to rethink the costs of their nuclear program” as David Sanger claims (typically without offering any proof).

It will hurt civilians.  It will hurt the great mass of Iranians outside of those we claim to be targeting.  This is an experiment in collective punishment.  The experiment involves putting the screws to an entire nation in hopes that the masses will rise up and throw out the real targets of our wrath.  This hope is false and unfounded.  The only way to topple the current regime is to allow events to take their course and leave that in the hands of Iranians themselves.

Further, the goal of Clinton and Obama is regime change, not just an end to Iran’s nuclear program as they claim.  This is a goal they will not attain, at least not by these means.

Collective punishment, starvation of a mass population is a violation of the Geneva Convention.  Our policy is a violation of international law.  The blood of the dead will be on our heads.  We will not let Clinton or Obama off the hook easily.  She will not blame the victim for his suffering.  We will tell the world that the U.S. is the perpetrator and responsibility for this empty suffering lies on our doorstep.