If we are to believe a recent Time magazine poll, the boobeoisie would vote in large numbers for the war criminal Hillary Clinton over the likes of Mitt or Rick or Herman. 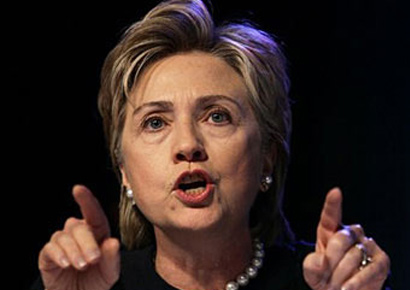 Ron Paul is not figured into the equation.

Clinton says she has no interest in running for president.

Clinton, Obama, Romney, Perry – it does not matter what hand-picked establishment candidate eventually warms a seat at 1600 Pennsylvania Avenue. The agenda remains the same. If elected by way of a rigged electoral college and Diebold voting machines, Hillary will read from the same script as Obama, Bush before him, her husband before Bush, and Reagan before Clinton, etc.

The news here is that the great unwashed, Mencken’s "boobeoisie,” are so easily bamboozled as to be a cosmic joke.

“Hillary, I’m sorry for not listening to you back in 2008,” confessed a Democrat on the pages of the Chicago Tribune back in August. “But perhaps you’ll give me another chance. Resign as secretary of state, and run against Obama in 2012. I will work my heart out for you. And I bet that millions of other angry Democrats will be with me.”

Millions of Democrats will be fooled once again, as they are invariably. Democrats are especially gullible and politically naïve, followed by mindless Fox News watching Republicans.

Both repeatedly prove Einstein right – insanity is doing the same thing over and over again and expecting different results.