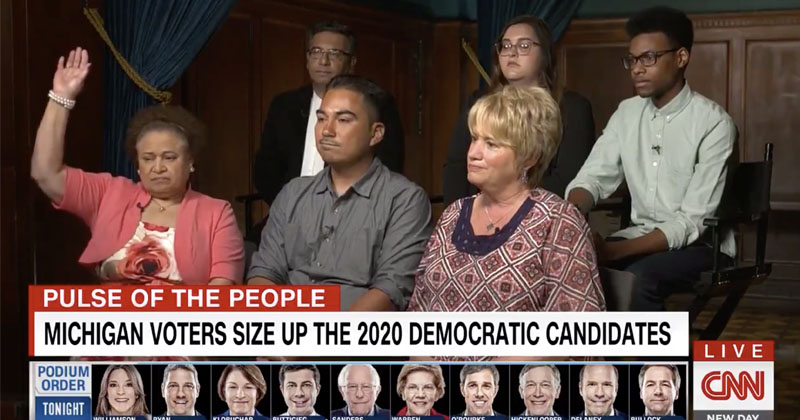 CNN interviewed a focus group before the second Democrat primary debate asking if they were optimistic about defeating President Trump in the 2020 election — and their response said it all.

CNN’s Alisyn Camerota asked six Michigan Democrats on Tuesday: “How many of you – show of hands – are optimistic that a Democrat will win in 2020?”

One woman raised her hand.

Only one Michigan Democrat in CNN’s focus group, was optimistic that a Democrat would defeat President Trump in 2020. pic.twitter.com/SW3rztWgoP

Camerota, exasperated by their bleak outlook, asked, “Why don’t you think you have better chances in 2020?”

One pessimistic Democrat said that their certainty Hillary Clinton was going to win contributed to their loss in 2016.

“I think blind optimism is how we got Trump,” one pessimistic woman said. “People feel like they didn’t need to turn out because they assumed that Trump would lose.”

“We really need a candidate that is gonna increase Democratic turnout and not a candidate that’s gonna convince Trump voters to vote for them because it’s not gonna happen.”

Another pessimistic Democrat voter said that Democrats must veer far-left if they hope to capture any enthusiasm in the 2020 election.

“I’m really afraid of this next election,” he said. “The Democratic nominee, I think that he will go too moderate to think he’s gonna get a big base of voters, and while doing that, lose a lot of the people that would have voted for a person who was more passionate, more liberal, more progressive.”

This isn’t the first time CNN’s panel didn’t perpetuate the narrative they wanted.