Less than a week after his tweet labeling President Donald Trump a “piece of shit,” CNN host Reza Aslan has been cut by the network.

“CNN has decided to not move forward with production on the acquired series ‘Believer with Reza Aslan,’” a network representative stated, according to Variety.com. “We wish Reza and his production team all the best.”

Aslan was in hot water for a vulgar tweet last Sunday reacting to President Trump’s response to the London Bridge terror attack.

Commenting on the tragedy, Trump tweeted:

We need to be smart, vigilant and tough. We need the courts to give us back our rights. We need the Travel Ban as an extra level of safety!

After much backlash, Aslan subsequently deleted that tweet and issued an apology, claiming, “That’s not like me.”

I should not have used a profanity to describe the President when responding to his shocking reaction to the #LondonAttacks. My statement: pic.twitter.com/pW69jjpoZy

But a 2012 tweet in which Aslan wished “someone would rape congressman Todd Akin” may have been the last straw.

“Just to be clear I was indeed wishing someone would rape congressman Todd Akin. I’d hate to be misunderstood,” Aslan wrote at the time in a now-deleted tweet. 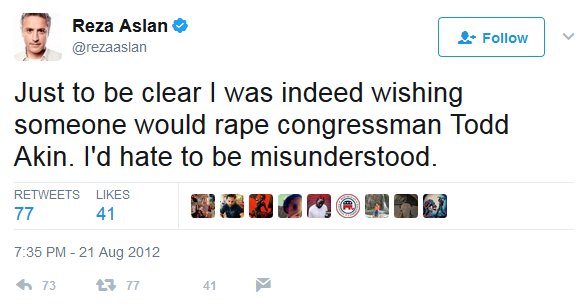 Newsbusters.org noted that as of noon Thursday Aslan’s pro-rape tweet had also been deleted.

Aslan’s firing follows the termination of CNN New Year’s Eve co-host Kathy Griffin, who was canned after posing with a bloody head made in the likeness of President Trump.