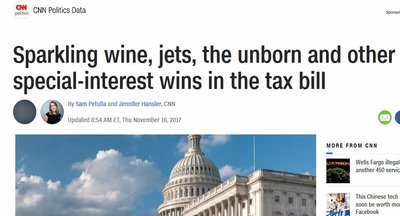 CNN lambasted the “modifications and potential sweeteners” inserted into the tax reform package passed by the Senate to benefit “lawmakers and industries,” including citrus farmers, alcohol producers – and, in a display of their indifference to the horrors of abortion, even unborn children.

In a measure identical to the tax reform package passed by the House, the Senate plan provides a specific definition of unborn children and stipulates they are eligible for a college savings account – much to the chagrin of CNN, which labeled unborn children a “special interest group” alongside citrus farmers, alcohol producers, and private aircraft management companies.

“An unborn child means a child in utero, and the term child in utero means a member of the species homo sapiens, at any stage of development, who is carried in the womb,” the legislation reads.

Under current law, a parent is able to open a 529 savings account in their name before a child is born and change the listed beneficiaries at a later time.

“A child in the womb is just as human as you or I, yet until now the U.S. tax code has failed to acknowledge the unborn child – all while granting tax breaks for those seeking an abortion under the pretenses of ‘health care,'” said Jeanne Mancini, president of March for Life.

Pro-abortion advocates were quick to denounce the measure, calling the idea that life begins at conception a “radical idea.”

“Asserting an anti-abortion provision under the guise of college affordability is a new-low even for this anti-choice GOP,” said Ilyse Hogue, president of NARL Pro-Choice America. “The sole purpose of this provision is to codify the radical, anti-choice idea that life begins at conception into law and begin the process of banning abortion all together.”

By equating rights for unborn children with tax breaks for alcohol producers, citrus farmers, and other “special interests,” CNN has demonstrated a sickening indifference to the slaughter of millions of unborn children since the Supreme Court’s ruling in Roe v. Wade.