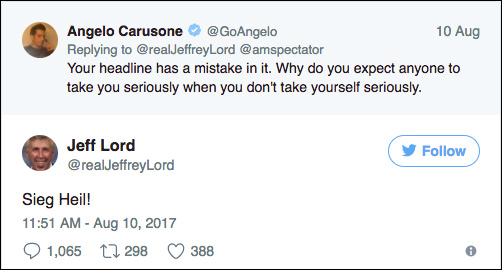 CNN contributor Jeffrey Lord accused the network of “caving on the First Amendment” following its abrupt decision to fire him Thursday.

The “fake news” outlet terminated the pro-Trump commentator after he directed a sarcastic tweet at Media Matters writer Angelo Carusone, who had criticized an error in one of Lord’s headlines over at The American Spectator.

Lord jokingly replied to Carusone with the infamous Nazi salute, “Sieg Heil!” – which also appeared in his original article.

“The objective of Media Matters (and let’s stop with the camouflage and from now on call them what they really are, MMF — Media Matters Fascists), clearly, is to re-write the First Amendment so it will now be modeled after Fascist Italy’s Ministero della Cultura Popolare — Mussolini’s Ministry of Popular Culture,” Lord wrote, labeling the contents of a Media Matters piece “fascist propaganda.”

The Trump advocate proceeded to defend his tweet, saying he would not apologize for mocking “Nazis.”

So opposing a Fascist/Nazi-style attempt to stop free speech is itself Nazi/Fascist? Ahhh Orwell.

Nice try! I will happy to mock Nazis and fascists any day. And since you lead Media Matters Fascists I understand why you hate it.

“Caving to bullies, caving to people who use fascist and Nazi-style tactics to try and remove people from the air is unacceptable,” Lord said.

“I mocked this guy. Mocking Nazis is OK. That’s a good thing, not a bad thing. A writer has only a handful of tools in his writer’s box, and mockery is one of them. To suggest that this is anything other than that, to my way of thinking, is caving in. And I’m not going to cave.”

The Anne Frank Center hailed the firing of “@POTUS defender” Lord as a victory.

Despite CNN claiming the tweet was “indefensible,” Lord has not lost respect for the network.

“I want to make something very clear. I have nothing but respect, affection and love for CNN. I think the world of CNN,” Lord told the AP. “I think they’re terrific people and serious people.”